Jimmy Torano and Scott Stewart win in hunters at WEF

WELLINGTON, Fla.--Jimmy Torano of Mohrsville, Pa., and Scott Stewart of Flemington, N.J., won the two over fences classes in Green Conformation Hunters on Wednesday, Feb, 17 on the first day of the World Championship Hunter Rider. 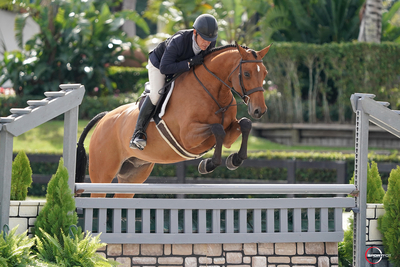 Jimmy Torano on Laskano (Photo by Spotfot)Highlights of the week will be the $50,000 WCHR Hunter Spectacular on Saturday night, Feb. 20, in the International Arena and the $137,000 Grand Prix CSI3* on Sunday, Feb. 21, on the Derby Field at Equestrian Village.

Spectators can watch feature classes live and on demand using the livestream.

With 20 entries in the Green Conformation Hunters, Torano rode Laskano to a score of 89 to win the first over fences class, and Stewart,won the handy round with a score of 90 on For Always.

Stewart also won the second class in Green Hunters on Love Note with a score of 88.

Evan Coluccio, of Marshall, Va., rode Philadelphia Story to win the first class in the High Performance Conformation Hunters with a score of 89, while Stewart on Private Life scored 85 to win the handy round and also won the model.

Two blue ribbons went to Stewart on Catch Me with scores of 95 and 91 in the High Performance Hunters.

In Green Hunter 3’6”, Torano and Isalou, Inc.’s Laskano won with a score of 90 in Section A, with Scott Stewart on Charlemagne winning the Section A under saddle.

In the Performance Hunter 3’3”, Sandra Ferrell, of Bernville, Pa., on Hemingway won the first class for Section A with a score of 91.