WELLINGTON, Fla.--Todd Minikus of Wellington on Napolean Of Picobello beat Laura Chapot of Neshanic Station, N.J., on Thornhill Kate by eight/tenths of a second in section A of the $6,000 1.40m Jumpers on Jan. 20 at the Winter Equestrian Festival. 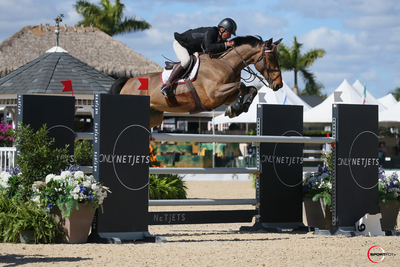 Todd Minikus on Napoleon Of Picobello (Photo by Sportfot)Minikus finished in 23.950  to beat Chapot's 24.769, while Laura Kraut on Didem du Thot finished clean in 25.729 to place third.

Alberto Michan of Isreal on Cosa Nostra, clean in 24.221, won section B over Sarah Hubbard on Latino van de Looise Heide, clean in 25.352, with Lauren Hough on Viva placing third in 26.139

The class drew a field of 105 entries, divided into the two sections, as the second week of the WEF got underway at the Palm Beach International Equestrian Center.

Minikus has ridden the 9-year-old Zangersheide stallion Napoleon Of Picobello for the past nine months, and he is starting to find a rhythm.

“IT WAS A nice course for the first class of the week and my horse has won three 1.40m classes in a row now,” Minikus said. “He won two last week and now today, so I’m pretty proud of his success so far. He’s a careful horse. He had a little bit of trouble focusing, and now he seems to be really focused and he’s becoming pretty consistent. I’m very thankful to Louisburg Farm for the opportunity to ride him.”

For Michan and Cosa Nostra, their return to the ring marked the first time since showing in the CSI3* in Wellington in November 2020.

“I gave her a nice break because she did a lot this past year,” he said. “I’m just starting to get her back to the ring, and I had planned to do two classes this week, but I felt her jumping so well I decided she would only jump today. Hopefully I’ll continue to bring her back to do the CSI4* and CSI5*. She has a lot of experience, she’s very careful and scopey, and I’m very happy to feel her first time out in such great shape. I’m hoping to have a good, long year.”