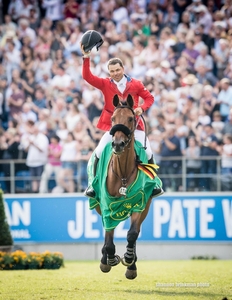 Kent Farrington (Shannon Brinkman Photo)They were both voted the award by the USEF membership, while Farrington was the only option due to the Covid shortened 2020 horse show schedule.

Farrington and Fenney, along with many more outstanding equestrians, were recognized for their achievements during the virtual USEF Horse of the Year Awards Celebration.

And, while Farrington won the equestrian award, his mount Gazelle, Robin Parsky and Kent Farrington’s 15-year-old Belgian Warmblood mare, was voted the 2020 International Horse of the Year .

Pritchard Hill, Balmoral’s 9-year-old Oldenburg gelding, was voted the 2020 National Horse of the Year by the USEF membership.

Gazelle and Pritchard Hill were also honored during the virtual USEF Horse of the Year Awards Celebration.

Kent Farrington is one of top jumping athletes in the world, consistently producing dominant results in the United States and abroad year after year.

Farrington’s roots in equestrian sport started in Chicago, Ill., where he began riding at the age of 8.

He quickly made his mark, ascending through the junior ranks before turning professional in 2000.

In 2019, he became the first U.S. rider to win the Grand Prix of Aachen and the International Jumping Riders Grand Prix of Geneva in the same year, both on Gazelle.

With a strong start to the season at the Winter Equestrian Festival in Wellington, Fla., Farrington set the tone early with win in the $214,000 Marshall & Sterling Grand Prix CSI4* aboard longtime mount Creedance, before guiding Gazelle to a second-place finish in the $401,000 Fidelity Investments Grand Prix CSI5*.

TRACY FENNEY, the National Equestrian of the Year, might be known for her winning results in the jumper ring but she’s had plenty of success in the hunter ring over the course of her career, including a notable win in 2017 at the $25,000 USHJA International Hunter Derby at HITS Ocala with MTM Outbid. 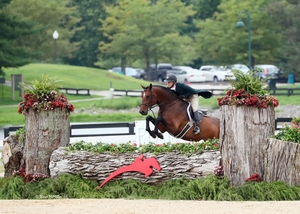 Fenney campaigned MTM Animated and MTM Dippin’ Dots throughout 2020 in the Green Hunter 3’ division, posting wins including those at Ocala January Classic, Equifest I and II, Texas Rose Sport Horse Cup, Final Chase and the championship at Showplace Summertime II.

Fenney has successfully trained and shown hunters and jumpers for more than 35 years, and has a long track record of producing exceptional green horses.

She is the co-owner, trainer, and rider at MTM Farm in Texas, where she imports and develops outstanding sport horses for the hunter and jumper rings.

In 2020, the National Horse of the Year,Pritchard Hill tallied numerous championship titles in the 3’9” Green Hunter and High Performance Conformation Hunter classes during five weeks at the Desert Circuit with Carleton Brooks and Leslie Steele in the irons.