Lyle and LaGoy-Weltz win again at the Dressage Festival

WELLINGTON, Fla.--Adrienne Lyle and Olivia LaGoy-Weltz both scored their second victories at the Global Dressage Festival on Jan. 16 and 17. 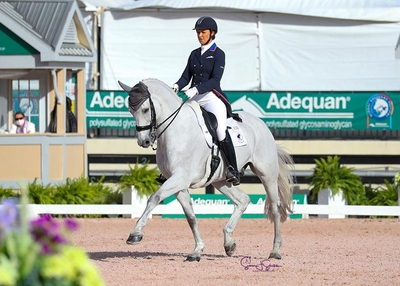 Lyle was three percentage points above second-place finisher Jennifer Williams, who earned a personal best score of 72.192 percent on Millione, and third went to Susan Pape of Great Britain on Harmony's Eclectisch, who received a 71.724 percent from judges.

“He felt much more comfortable in his own skin today,” said Lyle of the gelding. “I was really happy with him. He felt much softer in his back, and the connection through the ride was a lot better than in our test on Thursday. He was really able to show off some of his highlights today, and I’m thrilled with the overall performance.”

“He’s always had a lot of talent for the collected work, the piaffe, passage, pirouettes," said Lyle. "When he’s nice and supple and happy like he was today, he really shows it off nicely. With him, we’re always trying to find ways to keep him relaxed mentally in his work. He tries very hard, and we always work to keep a very clear understanding between us about what I’m asking of him.”

“He has done so well, and we won’t train super hard in between shows,” she said. “He gets to go home and have a little bit of fun!”

LaGOY-WELTZ and Rassing’s Lonoir also posted yet another victory on Sunday, Jan. 17, with their personal best score, an 81.545 percent in the Grand Prix Freestyle CDI-W. 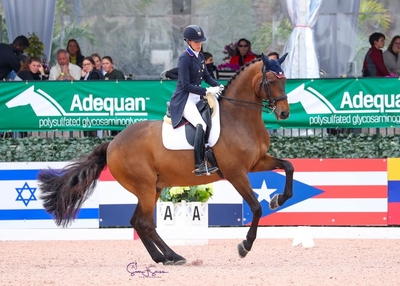 Olivia LaGoy Weltz on Rassings Lonoir (Photo by Susan Stickle)In second place wasYvonne Losos De Muniz of the Dominican Republic on Aquamarijn,with a score of 78.165 percent, and third went to Anna Marek on Dee Clair, who earned a 76.100 percent, another personal best.

“It’s great to get a personal best,” LaGoy-Weltz said. “Whenever you’ve been out for a long time – it’s been since February 2020 for us because of COVID – you always wonder if you’ll remember how to do it. You’re a little rusty, the test riding needs polishing, and the horse has to settle. It’s nice to be coming out this strong, and that makes you feel good about the whole program.”

Riding to pieces of the Simon and Garfunkel hit “Cecelia” with freestyle music created by Marlene Whitaker, LaGoy-Weltz perfected some of the suggestions given to her during the Grand Prix CDI-W on Friday.

“Last night I went over my test in detail, I and went over judges’ feedback from the last test to figure out where we are in the evolution of trying to allow more of this horse out, to look at the things I held back on Friday,” said LaGoy-Weltz. “For example, feedback on my last test was ‘Open up more in the changes,’ and I knew I could do that this time around. Here and there, taking the feedback and making the best of it is really important.”

Typically ridden during “Friday Night Stars” in years past, the Grand Prix CDI-W Freestyle atmosphere was different, but appreciated by LaGoy-Weltz.

“With a horse like Lonoir, I enjoy riding at night and have definitely figured out how to manage that because he gets quite hot, but I do feel like he wasn’t missing that enthusiasm too much," said LaGoy Weltz. "Of course, we miss the people and the fans, but we are very grateful to be having the show, so any format is a good format.

“Everyone has to dust the cobwebs off, even the judges, because we haven’t been judging because there haven’t been a lot of CDIs," said judge at C, Janet Foy. "We are all excited to get back to it.”

“The class as a whole was really strong." said Foy. "Today was probably one of the best days judging ever here in the U.S., because we started with judging super young horses in Summit Farms Future Challenge Prix St. Georges Final and the Lövsta Future Challenge Young Horse Grand Prix Final all morning and had wonderful horses all afternoon. I can’t say enough about the quality of the whole day. I gave Olivia a 10 on her first piaffe right in front of me. It was bouncy, it was active, and on the spot, beautiful contact, absolute harmony, and no tension. It was a super top-quality ride, the music was beautiful, and she rode to the music in a really wonderful way. Her degree of difficulty was incredibly high. To get that high of a score on the degree of difficulty but keep it harmonious, that’s very good riding. Super horse, super training, and I can’t say enough about it.”

Earlier in the day, Mikala Münter claimed her second victory of the week with her 12-year-old Oldenburg gelding Skyfall, this time in the FEI Intermediate II CDI3* with a 68.794 percent.

Second place went to Melissa Taylor on Dixie WRF, with a 65.206 percent.