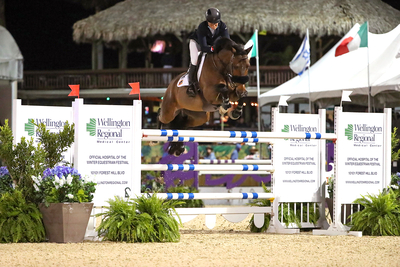 Beezie Madden on Breitling (Photo by Sportfot)There were 44 entries in the grand prix, competing over a course set by Anthony D’Ambrosio and Andy Christiansen Jr. of Ecuador consisting of 13 numbered obstacles, and only three were clean to move on to the jump-off in the first of four grand prix events under the lights for the 2021 circuit.

Sydney Shulman of Isreal on J-Boston S.E. was the first to go in the jump-off, but with a rail in the double combination, her four faults in 48.86 seconds landed her in third place.

“Tonight was actually his second night class ever," said Shulman. "I’d only gotten to do him one time in Tryon this summer, and we went at 6:30 in the first 10 in the class, so it wasn’t really under the lights. This was his first class here under the lights."

“We’re just building up,” she said. “I was thrilled with the way he jumped the first round. He made it really easy for me. He’s had a long break and is just getting back into the groove. I wanted to make it a confident experience this time so it can carry us through the rest of the circuit. I was really happy with that result.”

NEXT IN was Adrienne Sternlicht, a team gold medalist from the FEI World Equestrian Games in Tryon in 2018.

Riding Bennys Legacy, she put in a solid clear trip in a time 45.17 seconds for second place.

With an unfortunate slip in the jump-off in Thursday’s qualifier, Sternlicht returned to the grand prix jump-off planning on giving Bennys Legacy a confident ride.

“My horse jumped amazing this week,” said Sternlicht, who also won the Martha Jolicoeur Leading Lady Rider Award, given in memory of Dale Lawler. “I knew there were places that I could open up his stride, like the eight strides across the middle came up naturally for my horse, but I thought about being a bit conservative on the turns tonight to give him a conservative and confident ride with so much to look forward to this season. He responded really well, so I’m happy to be second tonight and always happy to be second to Beezie.”

Wrapping up the jump-off was Madden on Breitling LS, a 15-year-old SLS stallion by Quintero x Accord II, and she made quick work of the short course, clean in 41.87 seconds.

“Adrienne is so good at working out of that big gallop, and that horse is naturally quick anyway," said Madden. "I thought, ‘I’m not going to beat her on that part,’ so I tried to do it on the turns and just match her. The eight across the middle to the double looked a little risky from where I was sitting, but he did it well , and I think I beat her from fence one to two and maybe the turn after the double combination as well. I thought those were the only places that I could try and catch her.”

“I thought I’d just have to have a nice, confident round, and he really responded to it and jumped well anyway," said Madden. "A lot of times it’s hard for them to concentrate when you’re riding them a little strong, but I thought he really rose to the occasion and did that well. I was really happy.”

Madden is known for giving her horses a lengthy winter vacation, but after so many cancellations in 2020 due to the pandemic, she was ready to bring out Breitling early.

“I’m going to pick and choose where I think he’s going to do well,” she said of her 2018 FEI World Cup Jumping Final and 2019 Pan American Games double bronze medal winner. “I think for his confidence right now starting out, he probably doesn’t need a five star right away. I’m going to pick some classes where he can get confident, and when he feels really good, I’ll slot him into a five star here and there.”