WELLINGTON, Fla.--Lillie Keenan won the $37,000 WEF Challenge on Jan. 14 during the first week of international competition at the Winter Equestrian Festival, while Molly Ashe Cawley won the 1.50m class and Canadian Eric Lamaze opened the week with a win in the 1.45m class. 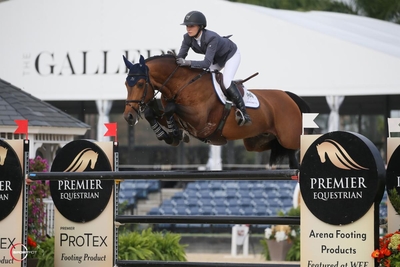 Riders from seven different nations made the jump-off, with Keenan, last to go, going clean in 39.95 seconds.

“I had a different plan if no one had been clear,” she said. “I knew I could do six down to the combination where a lot of people opted to do seven. In the first round I did seven; my horse is ridiculously talented so really my job is to stay out of his way. So, in that kind of situation with the speed I would be going in a jump-off, the six was simpler, because I was going to do less. Obviously, Shane Sweetnam was not only fast but also clear, so what changed was that I not only had to go fast, I had to try to be faster than him and clear.”

Sweetnam of Ireland on Indra Van De Oude Heihoef had been the first to finish the jump-off clean, and he finished second in 40.51 seconds.

Cassio Rivetti of Brazil on Genesis was third in 43.15 seconds.

KEENAN has had the stallion since he was 6 years old, and if it hadn't been for her mom, Pam Keenan, they would likely have never ended up together.

“Honestly, when I tried him, I didn’t want him,” said Keenan. “I knew that he was very talented. He has been winning since he was 4 years old with his previous riders, always a winner, but I felt that I didn’t necessarily suit him very well. My mom was the one that picked him and was like, ‘You are learning to ride this horse, and we are buying him.’ My mom rides him every single day for me. She was a very successful junior rider, and then stopped riding for a long time. She’s actually a really tiny lady and awesome rider, and he’s the one horse in the barn I can always trust to put her on even if he’s had some easy days. She does an unbelievable job keeping him happy and keeping him fit, so my job in the ring is really easy.”

A native of New York City, Keenan has now relocated to Wellington full-time as she continues to pursue a career in show jumping, and she has a farm nearby.

“I’m very fortunate to have a few different horses, not only my own but for some other people that have chosen to support me, and I’m really lucky with that opportunity that I can kind of diversify my string and try to spread my horses out,” she said. “Right now, it’s full steam ahead and we’re really glad to be back in Wellington.”

Cawley was clean in 36.54 seconds, but the last to return in the jump-off, Ireland’s Paul O’Shea , gave Cawley a run for her money as, riding Chacanntus, he was clean in 38.95 seconds.

“I watched them all go in the jump-off, and most did seven strides from fences one to two,” said Cawley. “My horse is really quick; she’s such a fast turner so I ended up getting six from one to two, and then she’s just so ‘on it’ in the jump-off always. I knew I needed to keep going to beat Eric because even Eric going a little conservative is quite fast. I had Paul coming behind me and he’s always fast, so I didn’t feel like I could play it safe. She was great!”

Lamaze on Chacco Kid had won the first big jumper class of the week on Wednesday, the $6,000, 1.45m Jumpers.

In the WEF 1 opening class in the International Arena, Lamaze completed the two-round course double clean, stopping the timers at 26.97 seconds.

“It was a nice opening course,” said Lamaze of the track designed by Anthony D’Ambrosio and Andy Christiansen Jr. of Ecuador).

“It’s the first class of the week, two-phase, power and speed," said Lamaze. "If you don’t go clear in the first phase, it’s a short course. Chacco is naturally fast, so for the speed part my strategy was just to shorten the turn and try to keep the same rhythm, and it was good enough for this class.”

First to go in the class, Laura Kraut on Goldwin had held the lead for most of the class after going clean in 27.55 seconds and third was Keenan on Cazaan clean  in 27.10 seconds.

It had been nearly four months since Lamaze had jumped in international competition, and he was happy to be back in the ring.

The horses are fresh," said Lamaze. "They’ve been resting for a long time, so I feel very good about all my horses at the moment.”