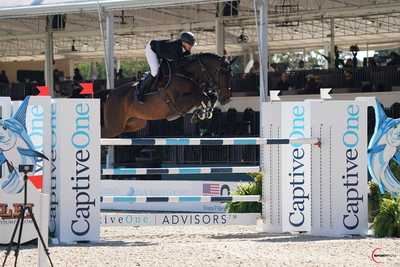 Quintana on Hemerald-Balia started the season off with a victory on the first day in the $8,000, 1.45m Jumpers with a clear ride in 31.67 seconds, a five second lead over the second placed Johan Kachelhoffer of Germany on Gabrovo, who finished in 36.85 seconds, with Victoria Colvin on Bipper Du Libaire third in 40.54 seconds.

On the second day of competition, Ballard on Walter White won the $35,000 WEF Challenge Cup Premiere Round.

Of the 37 competitors, 14 were clean to advance to the jump-off.

Riding out of the third spot in the jump-off, Ballard was chasing fast times set by the first two in the ring.

ON SATURDAY,  Ballard captured her second major win of the week in the $25,000 Classic, the fastest of seven in the jump-off for the victory.

There were 23 entries in the Classic, and seven clear rounds advanced to the jump-off.

Riding fourth in the jump-off, Ballard on Harvester was clean in 35.765 seconds.

Liza Finsness on Shiver was second with a clear round in 36.562 seconds and another Canadian, Amy Millar on Christiano, was the final double clear to place third in 37.450 seconds.

In contrast to Ballard’s winning ride on Walter White – a horse she had only ridden twice – Ballard has worked with Harvester for two years and knows him well.

“I have a nice history with him,” she said. “He’s always been one of my favorites.”

“Things are going my way," said Ballard. "I seem to be able to go fast right now, and everything’s falling into place. You definitely have to ride that way when you have the opportunity to.”

On Friday, Jan.8, Hannah Isop of Pawling, N.Y., on Believe won the $25,000 USHJA International Hunter Derby by moving up five places in the handy round to secure the victory.

“He is a complete goofball and total love in the barn,” said Isop of “Luca”, the 15-year-old Hanoverian gelding by Stolzenberg that she has now ridden for several years.. “He is really one of a kind to ride; I’m quite lucky. Luca is owned by an incredible family, the Harts, and their two daughters ride him as well!”

Isop and Believe received a score of 90 in the classic round, choosing all four high option fences, which put the pair in sixth place.

“We are all a little rusty coming off of a long break, but I was really quite happy with the horse and my first round,” said Isop. “He went in there confident. It was a course that was very open, so it was well built for his big stride and I could really show off in a couple places.”

Isop piloted Believe to an unbeatable second-round high score of 96 to climb to the top of the class with an overall score of 186.

“My plan going into the handy was just to have some fun. The handy was the icing on top for me,” Isop said. “Once he went in and jumped fence one, which was only about three strides off the fence line from the in-gate, I just knew that he was on it. He is able to gallop down to the four-foot oxer and at the same time float back to the trot jump with ease.”

Taking home second place honors was Kristy Herrera, of Wellington, Fla, on Carousel with a score of 91 in the first round and a 92 in the handy round, for a total score of 183.

Loxahatchee, Fla., resident Victoria Colvin rode Diacando to third with an 89.5 in the classic round and a 93 in the second round to end with a total score of 182.5.