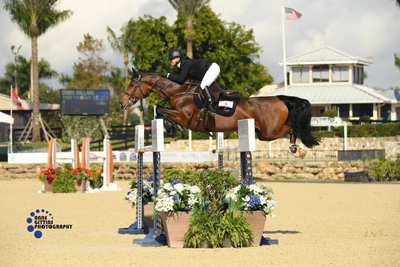 Erynn Ballard on Classic (Photo by Anne Gittins)“Classic Penny was amazing," said Ballard. "These classes in between the big ones are so nice to make a young one up. It was a nice opportunity for her to be in a big ring in a big class, and it’s a super nice win for her resume. I thought the course was really fair. There were plenty clear, but you had a huge group of horses in it, and some really big names. Our horse is only 8 and moving up, so for her it was a step up and she handled it beautifully. She’s very fast.”

Sixteen riders from five different nations  were clean to move on to the jump-off.

As the fifth-to-last to go, Ballard knew that the leading time of 37.87 seconds was from Jessica Mendoza on Casanova 499,  but slicing more than a full second off the leading pair’s time, Ballard finished in 36.74 seconds to win.

“I DIDN'T see Jessica, and I did so many strides from fence one to two,” Ballard said. “If you counted, Darragh Kenny did seven strides, and I did10, so I didn’t think I could win because I did 10 strides. I figured I would just stay going smooth and teach her how to go fast, but even when she adds strides she’s moving so fast. You’re not slowing down, so I think she’s just so fast that it helped us to win today.”

“Ilan Ferder, her owner, makes the plans, but I think you’ll see her start to step up and do some of the FEI classes, the speed classes, and probably some 1.50m grand prix classes,” said Ballard. “I have a huge amount of respect for the show manager, David Burton, and his team, and I think from June on they’ve done a phenomenal job. There’s no place I’d rather be!”

Fractions of a second behind Ballard, Paul O’Shea on Chacanntus was second in 36.99 seconds, and Grace Debney on Zarina De Vidau was third in 37.78 seconds.

At the onset of the week on Tuesday, Ramiro Quintana of Argentina on Hemerald-Balia won the $10,000 1.40m Open Stake over a field of 28 entries , with 12 advancing to the jump-off, five of which were clean again.

Clean in 40.05 seconds, Quintana and Hemerald-Balia won, followed by Jessica Mendoza on Casanova 499, second in 40.75 seconds, and Darragh Kenny of Ireland on Go Easy De Muze was third in 41.32 seconds.

The final class on Wednesday in the International Arena was the $5,000 1.35m Classic, won by Grace Debney of Hampden, Mass., and Darc Kiss Z, clean in 32.52 seconds, with Catherine Pasmore of Eindhoven, The Netherlands on Celesta Z second in 33.88 seconds, and third went to Caitlyn Connors of Media, Pa, on Don’t Worry Z, clean in 34.45 seconds.