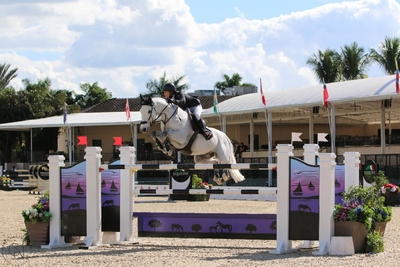 Laura Kraut on Confu (Photo by Carly Nasznic)“I have to say, I don’t know what year I’m on with him, maybe my fifth or sixth, but he has just been such a great partner for me,” said Kraut of Confu, a 2007 Holsteiner gelding by Contact Me x Cambridge. “He’s like my security blanket. Whenever I need one to come out and do something well, it’s him. I appreciate him every time I get to jump him and when he performs like this it just makes everything wonderful. Now I can rest easy for a few weeks and be happy with that! It was great. Anytime you win a class like this, it’s why we do it.”

THE LEAD changed hands a number of times before Shahinian-Simpson was clean in 40.13 seconds, then Bluman posted an even faster time of 39.93 seconds, but Kraut and Confu sliced even more time off the clock as the fourth-to-last challengers with a clear result in 39.75 seconds.

“This will be my third season with this horse. She’s great, and very, very careful,” said second-place finisher Bluman of Colestina H. “Her job normally is the 1.50m classes, as those are where she excels the most. That being said, sometimes she has to step up depending on how the calendar goes. This week she had to, and she delivered. She jumped amazing. She nearly won, so I’m thrilled with her. She gave an incredible effort.”

“I’m comfortable with her leaving strides and being fast because she’s so careful," said Bluman. "She does spend too much time in the air, so that sometimes makes it a little bit difficult for me to win. I saw that I could shave strides everywhere, and I knew my horse was really careful, so I knew I could really attack the jump, which I did. I’m very happy for Laura because she was great, and a second place for me today and a second place the other day in the Qualifier riding Alamo is super. It’s not a win, which is what we aim to do, but at least the horses are being consistent and the results are starting to be good.”

“Going in today, I was trying to forget about our hiccup, which is out of the ordinary for us and was totally my fault, in the Qualifier jump-off," said Shaninian-Simpson. "I wanted to make sure my mare was totally confident and comfortable. She jumped the first round amazing, and in the jump-off I wanted to be really smooth and get back in my gear. I felt like the other day I was a little bit too racy in my head, so I wanted to get back centered and she felt incredible. I was really happy.”

“I thought that I’ve got to go and give it the best that I can give it," said Kraut. "I’ve not historically been the quickest with him. I saw Daniel go right before me, so I thought I’d just try to do the same things that he did and hope to be a little bit quicker, which is what happened. I still thought that I would get beaten by Harry, Margie, or Shane, but I got lucky today.”

“2020 was nice for him because he really had an easy year!” said Kraut of Confu “We did a lot of riding out in the countryside in England, so he did a lot of hills, opening gates, and crossing creeks. He had a really nice year and worked his brain a bit. Today when I was going around, he actually felt like he was having fun and like he loved it, and it showed in the way he jumped.”

“I think we are all appreciating what we can do more than we would have in years past, so I’m very much looking forward to that." said Kraut. "I also have a string of horses that will be in Spain, so hopefully if everything works I will do a little bit of commuting back and forth. I’m keeping my fingers crossed that my plan will happen, but if not, who can complain about being here?”

The tough course meant only two advanced to the jump-off.

Adding to an already successful day, Bluman captured the victory on Ubiluc with a double-clear time of 42.727 seconds while Springsteen rode RMF Tinkerbell to second, clean in 44.17 seconds, and Teddy Vlock of Israel on Conner was third place with a single time fault.