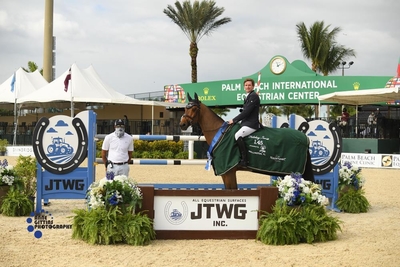 “I think in all of the classes I’ve jumped him in, he’s had one jump down,” said Kenny of Belo Horizonte, a 2008 Holsteiner gelding by Baloubet du Rouet out of Clearway. “He’s extremely careful. I was just happy I rode well today and the horse went great so it was a nice result.”

The course of 12 fences up to 1.45m in height and a time-allowed of 85 seconds produced 19 clear rounds, with McLain Ward on Catoki leading for the majority of the class.

Ward also rode Catoki to win the $37,000 Holiday II Opener CSI4* on Thursday and was looking to add another win to their list for the week.

ANOTHER frequent winner, Kent Farrington, this time on Take the High Road, was second in a quick time of 63.04 seconds, just fractions of a second behind Kenny and Belo Horizonte, who rode near the end of the starting list with the winning time of 62.94 seconds.

“I’ll build him up a little bit more during circuit," said Kenny of his goals for Belo Horizonte. "Maybe jump the 1.50m classes and maybe some of the three-star grand prix classes, then see how that goes. He can do jump-offs – he won the National Grand Prix last week with a jump off – and this week he won the speed. I think he’s just a really, really talented horse.”

“It’s always nice to win here, and it’s nice to be back here," said Kenny. "I like being in one place, and I’m happy to be starting out on a good note.”