Kent Farrington won again in Wellington, this time on Orafina 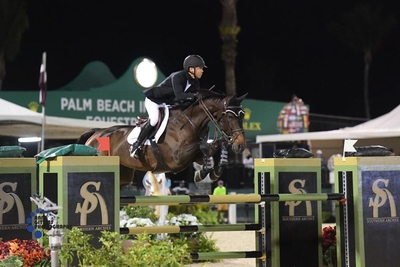 Kent Farrington on Orafina (Photo by Anne Gittins)The 16-effort course set by Eric Hasbrouck had 53 competitors contest the track, with nine riders going clean to advance to the jump-off.

Following faults from the first five riders, Tynan on Fancy Girl finally turned in the first clear round in the jump-off in a time of 41.51 seconds.

But Farrington on Orafina was the next to go and and quickly moved into the lead in a time of 40.58 seconds.

"Orafina is a great young talent,"said Farrington of the 8-year-old KWPN mare by For Fashion x Canturo. "She doesn't have a lot of experience, certainly not like this. Really hats off to the team here that keeps these shows going for us and allows us to keep doing our job and our sport. Early in the season like this, it's great for these young horses to get into the main ring. Tonight they even got a little taste of going under the lights. All in all, even besides the win, this was a great experience for my horse."

SATURDAY'S victory was the second major win for Farrington and Orafina of the week, after also topping the $15,000 Welcome Stake on Thursday as the quickest clear pair from the 14-horse jump-off. and his second in a Grand Prix, following his victory in the Nov. 15 $137,000 Grand Prix.

Jessica Springsteen of Colts Neck, N.J., on Hungry Heart was second, clean in 39.81 seconds, and Jonathon Millar of Canada was third on Shadow De Shalimar.

"Somebody that I work with in Europe, Leon Thijssen, said he had a horse that he thought I would like and would work for me because it's extremely careful," said Farrington of this new relationship with Orafina. "The plans are to build her up, just like always. Keep doing what we are doing by giving her positive experiences and time to mature. We will let her grow into herself. It was a great first step tonight." 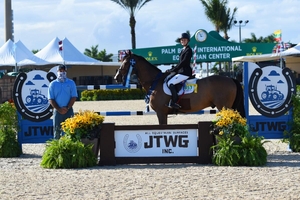 A field of 24 competed over the first-round course, with seven going clean.

As one of only two double-clear pairs, Wachtell was the clear winner, tripping the timers in 32.81 seconds, more than three seconds ahead of the next-closest rider, Liza Finsness of Wellington, Fla., on Shiver who finished in 36.16 seconds, and third went to Audrey Schulze of Saddle River, N.J., on Mr. Cash, the fastest four-faulters in a time of 36.18 seconds

Split between professional and non-professional competitors, 47competitors tackled the classic round designed by Danny Moore, with 24, 12 from each section, contesting the handy phase of competition.

Jimmy Torano of Mohrville, Pa. on Laskano,won the Derby Open class after receiving high scores of 90 and 94.

The victory was especially sweet for Torano and Laskano’s owner Daryl Portela, who sponsored the trophy awarded to the winner of the class in honor of her father, James B. Pirtle.