OCALA, Fla.--The World Equestrian Center, which has been running a series of shows at its venue in Ohio, is opening a new facility in Ocala, and it has announced that it will host a Winter Spectacular of horse shows featuring $9 Million in prize money and prizes. 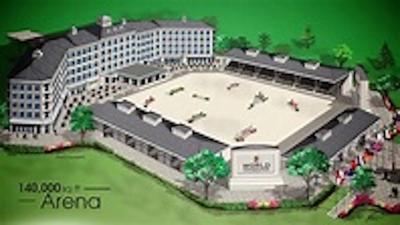 World Equestrian Center in Ocala But whether the Center will hold the Nations Cup that was at first awarded to it and who will be able to compete at those shows is up in the air.

More questions than answers still swirl around these shows, scheduled to run Jan. 6 through March 28, along with associated prize money, special classes and events and other important information.

A lot of it has to do with the mileage rule, as the Center is just a few miles from the venue of the HITS shows, which still only operate under an agreement with the Winter Equestrian Festival.

Many trainers and riders have spoken out against the mileage rule, saying that it perpetuates second rate shows and that, not only are there plenty of competitors to go around, but that the competition between shows would make for better shows.

Nevertheless, the mileage rule is still in effect.

ORIGINALLY, four weeks of those World Equestrian Center shows were to be CSI3* USEF premier rated, and the Nations Cup that will count towards qualifying for the Barcelona Finals was to be held during those weeks.

The remaining weeks were to be sanctioned by the National Snaffle Bit Association (NSBA), an organization with nearly 40 years of equestrian sport governance.

But since, the USEF has denied approval of those weeks, and officials at USEF say that awarding the Nations Cup to a venue is in the hands of the FEI,, and that the question of where the Nations Cup is to be held will be addressed at the next meeting of the FEI board of directors on Dec. 15.

Meanwhile, the World Equestrian Center has now announced that all 12 weeks will be sanctioned by the NSBA.

That brings up another question.

Under FEI article 113, FEI riders would not be allowed to show at NSBA sanctioned events.

That would affect all the jumper classes, but it would not affect hunter competitions, as they are not FEI sanctioned.

In a letter to USEF members, CEO Bill Moroney attempted to clarify the situation.

"As background, the WEC in Ocala requested approval to conduct 12 USEF licensed competitions during the 2021 winter season.

As these requests created a mileage conflict under the USEF competition licensing rules, WEC chose to apply for competition approval through the mileage exemption process.

In accordance with the rules, USEF approved WEC for four weeks of competitions during the 2021 winter season, demonstrating USEF’s good faith to work with organizers to add additional events within mileage boundaries when meeting certain criteria outlined in Chapter 3 of the rulebook.

Opportunities to conduct lower level events within the USEF licensing rules during the 12 week period were also identified to WEC.

Additionally, USEF supported the addition of new events to the FEI calendar and the allocation of the FEI Jumping Nations Cup™, even though this is the first year of operation of this venue, and the organizer has never hosted an FEI event."

But, Moroney pointed out that the World Equestrian Center intended to have NSBA sanctioned events during the 12 week period.

"USEF has determined that WEC’s arrangement combining both USEF and NSBA competitions in the same 12-week series is confusing to participants and officials, and most importantly, jeopardizes horse and human safety and welfare," continues Moroney.

"Due to these concerns, USEF has no choice but to withdraw all WEC hunter/jumper competition licenses it previously granted in connection with the Ocala Winter Spectacular."

Moroney said no points or money won at those Ocala shows would count towards USEF year-end awards, and "in furtherance of the best interests of the sport, USEF will not be granting a license to WEC for the FEI Jumping Nations Cup™ qualifier and we have informed the FEI accordingly.

"The FEI will make the final decision on this event.