WELLINGTON, Fla.--Bianca Tota on her own Cadento V and Susan Dutta with her Don Design DC were the winners of CDI3* classes in the Large Tour International dressage competition in Equestrian Village for the Global Dressage Fall Festival I CDI3* from Nov. 12-15. 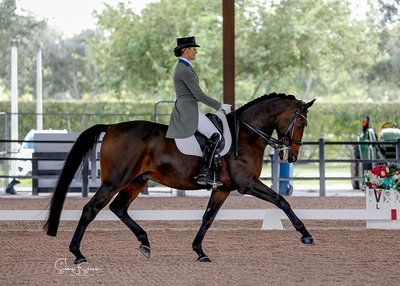 The Global Fall Festival II will bring dressage exhibitors back to Wellington from Dec. 10-13, 2020, during which time CDIW, CDI3*, and CDI1* classes will be featured ahead of the 2021 Global Dressage Festival that begins in January.

“He is absolutely special; one of the most special horses I have ever sat on,” said Tota of Cadento V. “I remember when I went to try him in Denmark, and he wasn’t fit and was doing Second Level, but I sat on him and thought, ‘Oh my god, I have to have this horse!’ So here he is now!”

In the Grand Prix CDI3*, Tota and Cadento V, a 2006 Dutch Warmblood gelding, scored 68.761 percent from the panel of five judges that earned them the blue ribbon by more than a full percentage point in the first CDI3* class of the horse show.

Returning the next day for the Freestyle, Tota improved on her performance to win with a score of 73.190 percent, once again first by more than a full percentage point.

“I’ve had him since 2014 when he was eight," said Tota. "It’s been a really fun journey to get here. It’s been a lot of hard work, which was always fun, but it’s so nice to see it pay off. He is an amazing horse, and I’m really lucky to have him. We will see how far we can get! We will keep on keeping on.”

GRAND PRIX CDI3* competition concluded Sunday with the Special and a new winner in Dutta on Don Design DC, the horse she co-owns with her husband Tim Dutta, who finished on a score of 67.872 percent for the win. 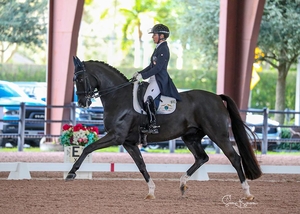 Susan Duta on Don Design (Photo by Sue Stickle)Tim Dutta's corporation that flies horses all over the world sponsors the Fair Hill International 4* Event with the slogan "We give horses winds."

“I’m on a really high-quality horse,” said Dutta. “He is still young, and I think there is a lot more in there. We had a really steady test with just one small bobble. I hope that he is a team horse someday. That is my big long-term goal, but right now I am just trying to get him some experience and mileage. This is the first horse show this season, and we were a bit rusty. He is still a bit green, but it was a super start.”

Dutta has trained Don Design DC herself along with trainer Adrienne Lyle since he was a 5-year-old.

Like many competitors, the partnership returned to the show ring at the Global Fall Festival I for the first time since the early conclusion of the Adequan® Global Dressage Festival in March.

“It feels amazing to be here," said Dutta. "I feel very lucky that we are able to do this. Even though we are taking all these COVID precautions, I feel super blessed that we are able to do our sport and keep going. Wearing a mask is something we should do anyway, so I think it's fine. I want to keep the horse shows going. All of us are training really hard, and we have a lot of sponsors behind us. For me, I have The Dutta Corp. and they want to see this horse go. We don’t want to sit, so we will do whatever we have to do.”