WELLINGTON, Fla.--Kent Farrington rode Kaprice to win the $137,000 Grand Prix over 45 international competitors from 12 nations in the International Arena at the Palm Beach International Equestrian Center on Nov. 15. 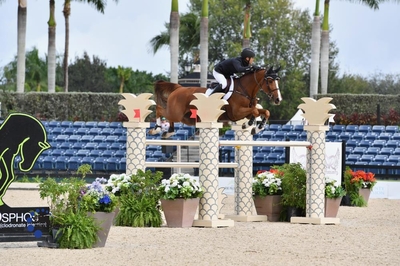 Kent Farrington on Kaprice (Photo by Anne Gittins)That concluded the ESP Fall Series, but CSI4* competition will resume Wednesday, Nov. 24, for the Holiday & Horses Show, the first week of the ESP Holiday Series.

Farrington was the fastest double-clear in the 16-horse jump-off in the $137,000 Grand Prix, while in the afternoon’s $25,000 National Grand Prix, Santiago Lambre of Wellington rode Mick Jagger to the win.

“I have an exceptionally fast horse,” said Farrington of Kaprice. “If you look at her on the ground she almost looks like a racehorse. She is really light, really lean, and her foot-speed across the ground is incredible. She is an unbelievably careful horse, maybe the most careful horse I have ever ridden. She does not want to touch jumps, so that’s a big advantage. She is stepping up to be a grand prix horse, and I tried to use her in some bigger grand prix classes this summer. My plan now is to keep growing her, and hopefully I can have a real grand prix horse there at the end.”

The 16 eligible for the short course round represented the United States, Great Britain, Ireland, Mexico, Dominican Republic and Brazil, and Farrington was one of the last to qualify, which would allow him to watch how the short course rode prior to his turn over the jump-off track.

SECOND-TO-LAST in the jump-off,  Farrington never let off the gas, finishing clean  in 39.28 seconds.

The final rider, Brian Moggre on MTM Vivre Le Reve, turned in a valiant effort but fell slightly short with a clear time of 39.79 seconds to settle for second place while Leslie Howard on Donna Speciale finished third in 39.98.

“I feel very fortunate that our sport is able to continue during difficult times, and hats off to the whole team here that is keeping the show running,” said Farrington of returning to international competition in Wellington. “I think we are all very grateful and fortunate that we are still holding high-level competitions here in Florida.”

The CSI3* class was followed later in the day by the $25,000 National Grand Prix, with 11 combinations qualifying for the jump-off, with two additional duos falling victim only to time faults.

First back in the ring for the jump-off, Eugenio Garza Perez of Wellington on Caracas, finished in a speedy and clear time of 37.87 seconds, and that time held the top spot for nine more trips, until the final challengers took to the ring.

Going last, Lambre on Mick Jagger was clean in 37.37 seconds to win by mere fractions of a second, with Garza Perez placing second, and Jessica Springsteen of Colts Neck, N.J,, on RMF Tinkerbell was third in 39.24 seconds.

“He is improving every week,” said Lambre of Mick Jagger. “This is the biggest class he has jumped so far I think. I hope he can start to do the FEI classes. In the jump-off, I can go really fast, and I can ride the fences without worrying about the faults. He needs to learn to ride a little better, but we are improving.”