MILL SPRING, N.C.--Boyd Martin of Cochranville, Pa., on Tsetserleg was double clear in show jumping to finish on 28.10 and win the CCI4*-L Eventing National Championship on Sunday, Nov. 15, just edging his close friend Phillip Dutton of West Grove, Pa., on Z, who placed second on 28.80. 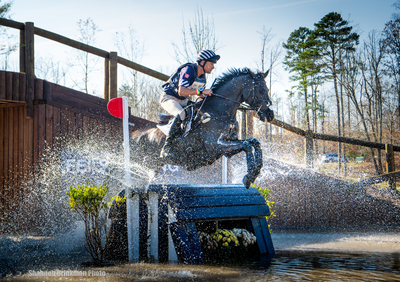 Boyd Martin on Tsetserleg on cross country (Photo by Shannon Brinkman)The championship title came down to a single rail in the show jumping phase of the Championship on Sunday.

With the top five combinations finishing cross-country within four points of each other, the pressure was on for overnight leader Elisabeth Halliday-Sharp on Deniro Z.

She almost had the win in the bag until that one costly rail on the final fence that cost her four faults and dropped her to fifth.

Halliday-Sharp’s loss was Boyd Martin’s gain, as he turned in a double clear round to take over the top spot and the National Champion title with a final score of 28.10.

As the top finishing U.S. competitor in the Championship, Martin was awarded the Guy V. Henry Memorial Trophy and Martin and Christine Turner, Tsetserleg's owner, were awarded the Gladstone Challenge Trophy.

Martin had three horses in the CCI4*-L, and after disappointing rounds with his first two, Thomas’s honest go around the course was an extra sweet victory.

“I had the old campaigner last, and Thomas went in and jumped like a champion,” said Martin. “The show jumping has been his weak phase over the years, and we’ve worked pretty hard at it. It’s very satisfying to get a good round out of him under pressure. I think that Thomas performs better when there’s pressure. I’m not sure if he knows which events are important, but he seems to do really well in dressage, cross-country, and show jumping when we need him.”

DUTTON also produced a double clear show jumping round to maintain his score of 28.8 and move into second place. 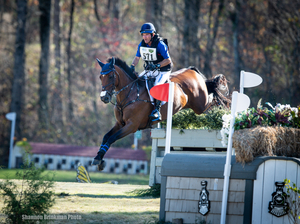 Phillip Dutton on Z on cross country (Photo by Shannon Brinkman)“I’m really pleased with Z,” said Dutton. “He tends to get a little wound up in the ring, but we spent a lot of time doing jumper shows and figuring out ways to kind of settle him down. I thought he was spectacular today.”

Woods Baughman of Lexington, Ky., on C’est La Vie 135, last year’s CCI3*-L National Champions, was double clear on cross-country and show jumping, adding nothing to his dressage score of 29.10 to finish third place.

“The horse is amazing,” said Baughman. “He just comes out in all three phases, and I can really trust him. I just point him and he never lets me down. Start to finish, he just came out swinging and really hung on to it.”

Martin and Dutton, who are veteran Olympic and World Equestrian Games competitors, both said that the pressure of being at the top of the leaderboard heading into the final day of competition doesn’t faze them too much.

But Baughman, a relative rookie at the CCI4* level, admitted that he had some nerves before entering the ring on Sunday.

“I was definitely pretty nervous this morning. I skipped breakfast,” Baughman said with a laugh. “But I know if I just let C’est La Vie do his thing, stay out of his way, and keep my position, he’ll pull it out.”

“I think they did an amazing job,” said Baughman. “I showed up here on Tuesday and it was down pouring and flooding. I thought, ‘they’re going to cancel cross country.’ By the time we actually ran, the footing was great.”

“It’s so great for the sport and the riders and the horses that Tryon stepped up and did this,” said Dutton. “This is a very unique venue, and we’re lucky to have it.”

Martin expressed his hope that the event becomes a permanent addition to the fall eventing calendar.

“I think Tryon is one of the best venues in the world,” said Martin. “I can’t tell you how much we appreciate all the guys out there making the cross-country course as horse-friendly as possible. I’ve been lucky enough to compete all over the world, and I’ve never seen so many people pull together to make the conditions fair for the horses.”

HALLIDAY-SHARP riding Deniro S hadn’t competed in a long-format competition since Burghley last year, so she said she was thrilled with Saturday's results, taking over the lead from Marilyn Little after she and RF Scandalous retired.

Halliday-Sharp of Lexington, Ky., on Deniro Z had just 1.60 time faults on cross county on Saturday to lead in the 4* L at the Tryon International Three-Day Event.

Heading into the final phase of the Eventing CCI 4*-L National Championship, Halliday-Sharp sat on a score of 26.10, just two points ahead of Martin, 28.10, and Dutton. 28.80 after a double-clear Cross-Country performance. 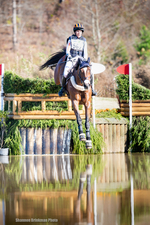 Elisabeth Halliay Sharp on Deniro (Photo by Shannon Brinkman)“Deniro is amazing, and I have a great partnership with him, which makes a big difference,” she said. “We haven’t run for eight weeks because Chatahoochee got canceled, which is a little bit longer than I’d like before an important four-star event, but he’s such a professional. I am a little mad at myself that I didn’t make the time, but that’s not his fault!”

“He’s a phenomenal horse, and a very good jumper," she said. "He feels 10 times stronger this year and like a different horse compared to what he was before Burghley last year. I think it taught him a lot. I’m hoping for a clear round tomorrow, and he’s more than capable of that. If I ride him the right way, I know that’s possible. I just need to look after him tonight, put our plan in place, and then execute said plan!”

Martin on Tsetserleg improved his third-place rank after dressage to second, one of three “warriors” Martin piloted through the Captain Mark Phillips course designs.

“I had a great day," said Martin. "I had some of my favorite horses: Blackfoot Mystery, On Cue, and Tsetserleg. To be quite honest, they were all a bit short of a run due to the fact that I’ve been out of action a lot this year, and also Chattahoochee got canceled. All three of them are warriors, and I was really pleased to get them around unscathed.”

By the time Martin rode Thomas cross country, he said, “I sort of knew the spots that were deep and muddy, so I chose to slow down in those areas. He’s such a seasoned veteran now, and actually did the course quite easily. It was great to be back at a big event. We’ve improved him a lot, but haven’t had any of our key events to go to, so it was fantastic coming to Tryon and giving it a good prep yesterday in the Dressage and a nice run today. He’s a joy to ride on cross-country, and has a serious engine.”

“I think this weekend is more about preparing them for next year," said Martin, looking forward to the Olympics. "When I say next year, I want to improve them in all three areas. When we go to a five-star next year, they’ll be better than if we just sat around and drank beer on a couch!”

“I’d just like to absolutely take my hat off and thank the 20 or 30 guys and girls who’ve been out on the cross-country for the last couple of days," said Martin. "The amount of money, time, effort and energy that’s gone into making this course rideable today is unbelievable,” he emphasized. “I think all of the riders should buy them beer! They’ve been working like dogs out there. From a rider’s point of view, I cannot say how much I appreciate the hard work, effort and energy that went into trying to make this course as safe and rideable as possible. It’s greatly appreciated. It’s nice to win these competitions, but it’s more important that the horses are healthy afterwards.”

Dutton said that Z was “an absolute superstar” on course, particularly on a day where “nobody was quite sure how it was going to ride until your horse was out there. He jumped it all pretty easily, which was exciting. He was able to get in the time when the conditions were not ideal in the end.

“Z is a very good and athletic horse, and he loves the Cross-Country," said Dutton. "Galloping lanes usually slow things up, but the idea was not having them today so that the horses could spread out and get better footing. (the event run without spectators and also without ropes defining the galloping lanes) We weren’t all on one track, so I think that was a good move to do that.”