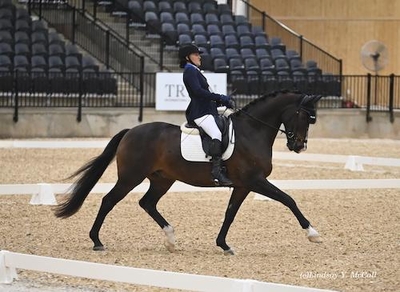 After three days of competition, Sydney Collier of Ann Arbor, Mich., on All in One earned the reserve championship award on a final score of 78.711 percent in the Grade I freestyle test.

Over the three days ,13 riders competed in the CPEDI3*.

With the rescheduling of the Tokyo Summer Paralympic Games in 2021, this show was an important step on the way to earning a spot on the Paralympic Equestrian Team.

During the CPEDI3* the USEF Team, led by Chef d'equipde Michele Assouline, included Sydney Collier on All in One, Rebecca Hart on El Corona Texel, Cynthia Screnci of Boca Raton, Fla., on Eragon VF and Kate Shoemaker of Wellington, Fla., on her new mount Gaborencio.

For the emerging athletes including many young riders, this was an opportunity to show in front of international CPEDI judges while competing in the national para-dressage show.

"IT WAS QUITE an exciting show," said Assouline. "Our athletes scored in the 70's, showing the world that they are in the top of their game for European competition. We have two athletes in the league of European riders. If we compare last year to now all of our athletes are doing great. As for our future plans, it's even hard to plan short term. We are looking forward to Florida in January, and another show in March, and then I would like to come back to Tryon where Sharon Decker has extended the use of this amazing international facility to train more."

Hart competed on two horses, riding Fortune 500 as well as El Corona Texel, and had outstanding tests with each mount, with her rides on El Corona Texel earning the National Champion.

Hart, who previously trained with Jessica Ransehousen in Unionville, Pa., has earned many National Championships over many years of competing in para-dressage.

"Winning the championship was an amazing feeling," said Hart. "Tex gave me the absolute best birthday present ever. It’s been a long journey to have him come together the way he did this weekend. I am so thrilled with both of my horses, they rose to the occasion and I couldn’t be happier. I have to thank their owner Rowan O'Riley for trusting me with them and for trusting my amazing trainer Melissa MacLaran-Velix who was unable to come with me on this trip. We laid a plan out how to handle everything and the results spoke for themselves."

Hart was one member of Team USA that helped secure top international scores.

"I loved being part of the team, everyone did fantastic on the team and truly every para-dressage rider at this show," said Hart."I would also like to thank the Tryon team of officials, show staff, volunteers, US Equestrian, and so many others that helped to produce this amazing show. We are all grateful for the hard work that each person has put in to create this."

Hart, a veteran in para-dressage competition, cheered on the first time competitors , and following the competition she spoke to the young riders about their future in the sport.

Hart remembered where she was in the beginning and where she is now on the international stage and spent her time to talk to the new riders in the discipline.

"I enjoy helping out these young riders and emerging athletes," said Hart. "Veronica Gogan and I had been talking for a while about our disabilities since our bodies are similar. We talk about saddle fit, compensating aids, and much more. I want to give that knowledge that I have experienced to someone else so I can make their path a little less complicated."

Collier on All in One won the National Reserve Championship with scores over 75 percent or more.

"My rides went so well, they were awesome," said Collier. "I am very pleased how I made things come together and how Katie Robicheaux has helped me to learn a lot of things in a short amount of time. It’s so cool to be able to come here and have all of our hard work in quarantine pay off and work in the show ring. To get to go in there and have that partnership with Alle is exciting. Without my horse owner Georgina Bloomberg and without my trainer Katie none of this would be possible for me. They have made this success possible."