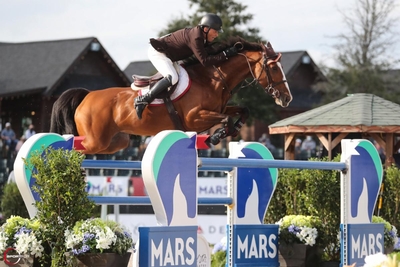 Todd Minikus on Amex Z (Photo by Sportfot)Thirty years after his first WIHS grand prix win, Todd Minikus raced to an historic third victory, but this time at the Tryon International Equestrian Center instead of in Washington due to Covid-19.

Minikus first won the President’s Cup in 1990 aboard Thrilling and then took the title again in 2009 riding Alaska.

His third victory puts him among a talented few who have their name listed on the prestigious trophy more than twice, including Rodney Jenkins, Beezie Madden and McLain Ward.

Third place saw an unusual tie between Beat Mändli of Switzerland on Galan S and Lillie Keenan on Fasther, both of whom stopped the timers in 37.39 seconds.

Keenan also received  the Leading Lady Award and the U25 International Rider Award.

ANTHONY D'AMBROSIO designed the course that tested 50 entries over the first round, with15 pairs going clean to move on to the jump-off. 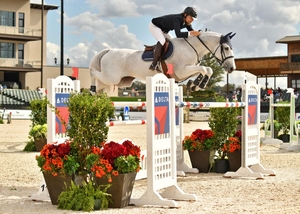 “I have to be honest, when I was in the schooling area and I saw Karl’s horse, who was just unbelievable last week, and Beat Mändli, who the week before rode one of the fanciest jump-offs I’ve ever seen in my life, and Lillie’s freaky fast chestnut, and then Kent Farrington, I thought, ‘wow this is a crazy jump-off,’” Minikus said. “My horse warmed up well, and I gave it a good try, and somehow it worked out!”

“The truth is it took this mare a while to be competitive at this level, and this summer she stepped up and won six or seven, or maybe even eight Grands Prix,” he said of Amex Z. “She started learning how to win, even if some were smaller classes, and it paid off today!”

“Amex has really come on strong this year," said Minikus. "I got to go a little late in the order, but I heard them announcing ‘a little bit faster, a new leader, a new leader.’ When you start hearing that, you know they are turning up the heat. I got lucky that I nailed the first jump in perfect stride, and the second fence came up perfect. I took a chance to the second to last and chased the seven strides to the last jump. Sometimes it works out!”

This was Cook’s first time to compete in the WIHS President’s Cup. 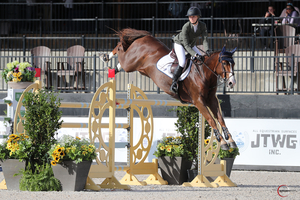 Lillie Keenan on Fasther (Photo by Sportfot)“The only place I could really let Caillou’s strength come up, his stride, was from fence two to three,' said Cook. "I just tried to do the best that I could in the turns, and I think Todd got me at the second to last fence, where I had to add. Even if we did the same number of strides, because Caillou’s stride is so much bigger, it was an add for me, and I was pulling, but I also don’t think the six was physically possible. So, I think the second to last and the last fence is where Todd got me. I’m happy with that!”

Mändli capped off his first experience at Tryon with the third in the President's Cup in addition to his win in Tryon Fall 3’s $137,000 Grand Prix CSI 3*.

"Things worked out very well," said Mändli. "I really like it here. The venue is obviously very good, everything is perfect, I think. Galan S is the sweetest horse I have ever sat on. He is like a little kid, and he tries to please you in everything that he does. He is a fantastic horse.” 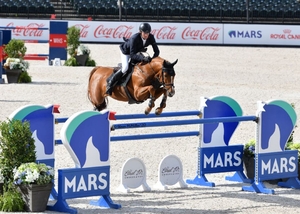 Beat Mandli on Galan S (Photo by Shawn McMillen photography)"Fasther is the most talented horse I have ever had the pleasure to ride, and I am extra lucky, because he is mine," said Keenan. "When I first got him, I knew he had all the talent in the world, but rideability was a big struggle. The jump-off is not my personal strength at the moment, with any horse. But luckily my horse is absolutely unbelievable. I think he is probably the best horse in the world, and I just have to do my part.”

“I slowed down on my way to the last line, and that was the one place I second-guessed myself," said Keenan. "I shouldn’t have done that, but I am over the moon to be here and to be sitting with this group of riders. I am absolutely thrilled. I think any event that promotes women in sport is admirable, and I am really privileged to be here. Hopefully, I can help prove that women are just as good, if not better than men in our sport.”