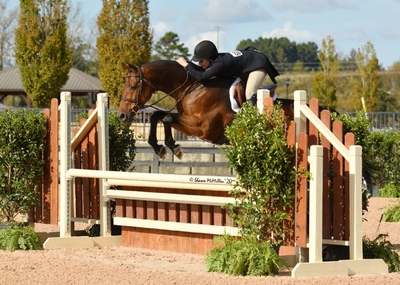 Mattie Worsham on Scout (Photo by Shawn McMillan)The Children’s Hunter Championship was won by Margaret Stell of Winston-Salem, NC, aboard Clever, both titles being awarded on the first day of the WIHS.

When Worsham, 23, pulled Scout out from the retirement field two years ago, she never imagined he would bring her back to the show ring, let alone the winner’s circle.

Scout, a now 20-year-old gelding, was Worsham’s junior hunter mount beginning when she was 13.

After suffering from several degenerative conditions, Worsham and her family did their best to keep him sound and happy.

“He was off for almost four years, and my dad who is a veterinarian with his own practice  at Foxdale Equine Veterinary Services worked tirelessly to get him back here, while my mom took care of him while I was away at college,” said Worsham, who is currently pursuing her PhD in English from Louisiana State University. “It is a dream come true and very redemptive to get him back here, especially since we grew up together. He will have a very happy long retirement after this at our farm in Aiken. It was really nice to be able to end his career here.”

WHILE VICTORY was extra sweet for Worsham and her long-time partner, it was an unexpected result.

“It was not the plan to bring him back; it was experimental more than anything else,” she said. “One day in 2018, my dad said ‘Let’s look at Scout.’ We decided that maybe he could come back. This championship wasn’t even on my radar, and it was a reach for me to even end up here. At the beginning of the year, my trainer Courtney Goldstein suggested that we try to qualify for WIHS, and I really wouldn’t be here without her help.”

Worsham sat second before the second round of the two-phase championship, but moved up with a score of 86.

Combined with an 85 from the opening round, her final score of 171won over Helen Voss of Versailles, Ky., who finished second on Cantina with a total score of 170.

“I feel so grateful that we were able to have our finals during this time,” saidd Worsham of the unusual circumstances surrounding the COVID-19 pandemic that brought WIHS from Washington D.C. to TIEC. “I think it was so important for people to be able to come back together even though the world is different. A great source of comfort for me during the early days of quarantine was that the horses still have to be fed every morning. That part of the world doesn’t stop turning, and it was great of the shows to pick up on that as well and be able to bring us back here.”

Her score of 87 set her apart from the field and was combined with a 76 in the second round for a total of 163 and the win.

“Clever is perfect,” said Stell. “He is all try – you could point him at the moon and he would say, ‘If you are down to jump the moon, let’s do it.’ He’s a once in a lifetime horse."

“It was very unexpected to even qualify for this,” saidd Stell, who trains with Pat Dodson and Keith Hastings, and was accompanied by her mother and groom, Jennifer Clauss. “The trip to qualifying was definitely a crazy ride because we took so much time off that when we first came back in June, it was a little bit rough. My horse was there the whole time; I just had to reconfigure how I was thinking about it. The feeling of coming out here and winning is amazing.”

“I really loved the part of the course with the nine-stride bending line,said Stell. "Bending lines are a little bit of a struggle for me because you have to jump in and decide right then if you want to bend out or keep it more direct, but that bending line was right there for us.”

Stell is currently a senior in high school and considering studying nursing in college.

Runner-up to Stell, Tillie Hall of Keswick, Va., was second on a final score of 161.