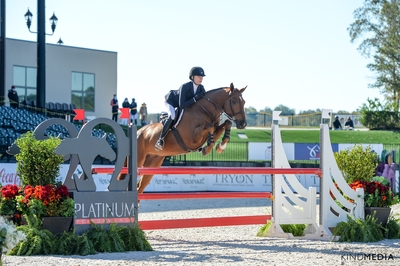 The competition was judged by Lauren Hough of Wellington, Fla., and Archie Cox of West Hollywood, Calif., who also served as the course designers, with assistance from Technical Delegate Anthony D’Ambrosio.

The competition is comprised of four phases. with phase I demonstrating each rider’s abilities and skill with judged flatwork exercises, and phase II tests their ability over a technical gymnastics course designed by the judges.

Phases III and  IV take place on the final day of competition, with phase III requiring the riders to complete a 1.15m jumper course with an open water element, followed by phase IV, the work-off, where the top four riders must complete a jump-off style course aboard their horse and each of their competitors’ horses to ultimately determine the final results of the class.

Finishing on a final score of 363.0 at the conclusion of phase IV, Yeager of West Lake Village, Calif., narrowly edged Stearns, who finished with a score of 360.5 with Rizvi finishing on 354.0, while Griffiths-Madden received an overall score of 329.0.

“My goal this week was to come out on top, but really, I came in just wanting to have nice consistent rounds and have some fun." said Yeager. "It’s my last year in these finals and it’s with my best friend, so I really just wanted us to have fun. He and I have known each other for so many years, so it just clicks when we get on and go in the ring.”

Yeager and Copperfield 39, her 14-year-old Holsteiner gelding, have worked diligently on their flatwork with trainers Missy Clark and John Brennan of North Run.

In what is typically their most challenging phase, Yeager finished 10th on Friday, setting them up nicely to continue their move up the leaderboard through the remaining three phases of competition.

“The flat is definitely the hardest for us," said Yeager. "Missy, John, and I have worked a lot on that. We changed the bit and we haven’t had a jumping lesson. We’ve really just had flat lessons because that was our biggest concern coming into this weekend.”

When asked about the advice her trainer Missy Clark gave to her before the work-off, Yeager said that Clark, who won this year’s Leading Trainer Award, alongside her husband, John Brennan, ultimately told her to just ride and trust in her own abilities and judgement.

“We all know how to ride ,and her advice was just go out there and be calm," said Yeager. "We know how to jump the horses and all of them were amazing. This was always the hardest class for Copper and I (sic). We would always win the Medal or the Maclay classes and then would be fifth in the Talent Search, so this one will definitely stick with me forever and is really, really special.”

“We were looking for strong, confident, forward-thinking riders that could think for themselves and we asked different questions of a forward ride, a conservative ride. The top four riders did it beautifully,” said Cox.

“I spent a lot of time on the gymnastics course," said Hough. "I sent Archie a lot of pictures, and I really wanted to ask questions. I didn’t really care if they did four or five, but if you didn’t do the four well or didn’t do the five well, you were penalized. This has always been my favorite final. You get the elite of the elite, and the young kids who compete in this class will all leave as better riders.”