MILL SPRING, N.C.--McLain Ward on Contagious was uncatchable in the $37,000 Horseware Ireland Welcome Stake CSI 3* at Tryon International Equestrian Center and Resort on Oct. 15, stopping the short-course timers in 40.4 seconds for the win. 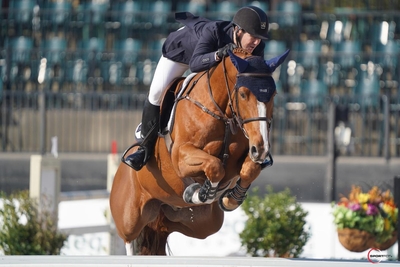 McLain Ward on Contagious (Photo by Sportfot)Amanda Derbyshire of Great Britain took two top-five placings, riding Cornwall BH to second on a time of 49.83 seconds, while also claiming fourth aboard Luibanta BH in a time of 41.56 seconds on four faults.

Darragh Kenny of Ireland rounded out the top three with Carthano, putting in the fastest four-fault round in a time of 41.43 seconds.

The Ghuiherme Jorge course design saw 100 entries challenge the first round, with only six pairs earning the chance to tour the jump-off track.

“It’s a tough situation," said Ward. "It’s a three-star event, but because of the state of the world and our sport right now, you have 100 competing today. To me, that was like a five-star 1.55m track. I’m lucky to have a horse like Contagious who’s up to that, but you also saw a lot of horses today who were surprised by it.“

CONTAGIOUS sustained an injury just before the Pan-American Games, and has been slowly coming back to top form this summer, Ward said.

“We took our time and brought him back really thoroughly, and he’s been building up through the summer," he said. "He’s really felt like a different horse! I think the time off helped him mature a bit. He feels really healthy and has basically either won or been the fastest in every Grand Prix he’s been in. He’s starting to fire all cylinders."

“He’s a very fast horse, and very careful,” Ward said. “If I have a rail down in a jump-off, it’s through a double where maybe I try to do too much. Today, I went fast everywhere and just took a breath at the double. He jumped it beautifully, and then I brought him home. He’s typically quick and it went our way!”

“This year has been difficult for everyone," said Ward. "Hopefully in the new year, life and sport can start to go back to normal… That’s what we all wish for. In the meantime, we’re trying to make good decisions for our horses, give them a rest when they need it, build them up when they need it, and be in a good place come 2021 with hopefully the Olympics on the horizon.”