MILL SPRING, N.C. –Frank Madden, who has trained his now step-daughter Taylor Griffiths-Madden, since she was 5, trained his eighth Medal National Championship winner when Taylor emerged victorious from a starting field of over 200 juniors. 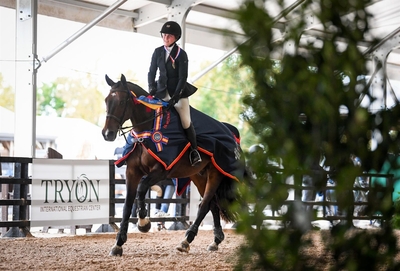 Taylor Griffiths-Madden (Photo by Taylor Pence, USEF)Moved to the Tryon showgrounds in Mill Spring from it's usually venue at the Pennsylvania National Horse Show in Harrisburg, the Medal also changed its format, having the first round on Saturday and the final top 25 and the ride-off on Sunday.

Griffiths-Madden, 18 of Wellington, Fla., rode Mac One III, an 11-year-old warmblood gelding owned by the Maddens, to secure the gold medal..

“This is my last medal final, and we drove here from Ohio (where the Capital Challenge Horse Show as held) with my horse Mac One III," said Griffiths-Madden. "I was just hoping to have a solid last medal finals, and, of course, hoped to win. I’m really happy it turned out the way it did.”

Called back on top of the six top riders to return for the final test, Griffiths-Madden demonstrated beautiful technique as she answered every question with poise.

“I was a little nervous because the test was very long, and then of course the no stirrups part, which is not always that fun, but I watched all of my friends go and we were all talking to each other and helping each other out,” she said. “It’s hard going into the test knowing you're on top because it means you have to really stick to it, so it was a bit nerve wracking.”

The course, designed by the judges, Ralph Caristo, of Saugerties, N.Y., and Rachel Kennedy, of Brookeville, Md., with some assistance from Steve Stephens  of Palmetto, Fla., who provided the fences, challenged 25 hopefuls who were invited back to test over an abbreviated second course that required a forward, yet fluid, bending ride.

The top six then returned for one final test where they had to demonstrate a hand gallop, counter-canter, halt, dropped irons, roll backs, and canter their final fence in the opposite direction under the watchful eyes of judges

Originally campaigned as a top jumper, Mac One III transitioned to the equitation and has successfully carried several notable young riders to top national finishes.

“Mac originally was doing the 1.45m with Lauren Hough, and then she brought him to Missy Clark who started him in the equitation. Sam Walker showed him, and Ava Stearns a little bit, and I didn’t have a horse, so Missy let me ride him,” said Griffiths-Madden. “After getting along with him so well, we decided we wanted to buy him and I’ve had him for about three years now. He has the biggest personality and is the sweetest horse. I just love him so much.”

"EVERY ROUND, Taylor just got better and better," said Caristo, who gave up acting as chef d'equipe for the Zone 2 team at the Prix des States to judge the Medal. "Krista Freundlich always was my first choice to act as chef d'equipe when I couldn't do it. I still put everything together before. I judged the Medal four years ago, but that's the only other time I haven't been chef d'equipe for Zone 2."

"Taylor had a very confident ride," said Caristo. "Nothing changed from the first fence to the last. She's a quiet, smooth rider, and she knew exactly where she was all the time. Her position never changed. It was beautiful to watch."

"This was the eighth Medal winner I've trained," said Madden." But to have my own kid on a horse you own, this was one of my best moments. It's been so fun."

"Taylor loves the jumper ring," said Madden. "She's been showing different horses for people. She won the Zone 2 Regionals twice, but we didn't show there this year. She won the New England Medal Finals, she was third in the USET Finals a couple of years ago, and she was second in this year's Capital Challenge equitation class."

"Taylor got a full scholarship to SMU," said Madden. "She's been doing online schooling during Covid."

The reserve championship and silver medal were awarded to Elli Yeager of Wellington, Fla, on her own Copperfield 3.

"Eli was terrific also," said Caristo. She rode very strong from the beginning, but there were a couple of spots where she wasn't quite as smooth as Taylor."

Sam Walker of Nobleton, Ontario, third on Waldo, was the first rider in the final test to go, exhibiting a beautiful counter-canter line and rhythm.

"Sam cam back sixth for the final test," said Caristo. "His test was flawless, so he moved up to third,"

"The test wasn't easy," said Caristo. "It was a championship, so the test gave them something to think about. They really had to work at it."

Our equitation division is very strong," said Caristo. "There are some up-and-coming 13, 14 and 15 year olds who are amazing. It's our trainers who are so good, and the horses that they get for these kids that are so good."

"It was a pleasure to judge with Rachel, and working with Steve on the courses was great," said Caristo. "Steve helped us with the distances on the courses, and the jumps were beautiful."

"It was a great class," said Caristo. "There was a downpour both days, and the poor kids that had to school outside came into the arena with wet britches, and were slipping and sliding in the tack."

Both Madden and Caristo liked the new format of having the first round on Saturday with the final 25 and work-off on Sunday.

"It's much easier on the horses," said Madden.

"I really liked this format," said Caristo. "When you do it all in one day, it's really grueling, both for the kids and horses and for the judges. I was so pleased for Frank for his eighth win and with his step-daughter."