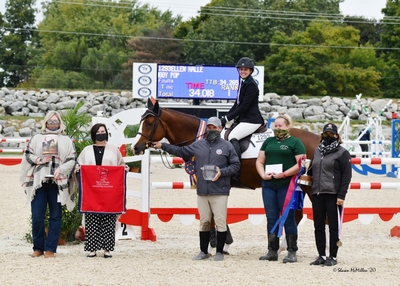 The NAL offers year-long Series in each of these five divisions with those who accumulate the most points in their divisions over the course of the season earning the right to ride in the year-end Finals.

Emerging victorious in the Adult Jumper Final was Ellen Halle of Upperco, Md, with Iggy Pop, who completed the jump-off in a time of 34.01 seconds.

“The jump-off was icing on the cake for me,” Halle said of her win.

​The winning pair were matched together in March of this year, and this was Halle’s first ever final.
Ellen Halle and Iggy Pop (c) Shawn McMillen Photography
“This was definitely worth the trip, and I am super grateful to be here and to be part of a competition with such high caliber athletes,” said Halle who trains with Troy Hendricks. “They’ve really gone the extra mile to make it a great experience for all the exhibitors.”