TRAVERSE CITY, Mich.--Kent Farrington rode Gazelle shaved eight/tenths of a second off the time of Lillie Keenan on Fasther to win the $213,300 American Gold Cup Grand Prix CSI4* on Sept. 13, making this the second time he's won this prized competition. 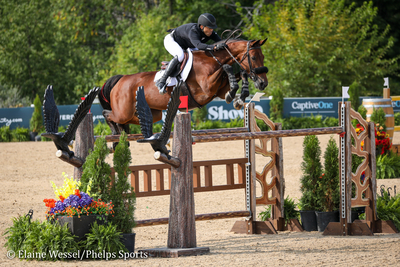 Kent Farrington on Gazelle Farrington benefited from going last in the 15 horse jump-off from a field of 50 top international riders from nine countries, which allowed him to know the time he had to beat.

Another benefit, perhaps the biggest of all, was the fact that two of the top seeded riders in the event, Beezie Madden and McLain Ward, each had four faults in the first round and didn't make it into the jump-off.

MADDEN had won the Gold Cup three times previously, and Ward, who has never won it, had said two weeks before the class that winning it this year was a priority for him.

Farrington on Gazelle, the horse he co-owns with Robin Parsky, made two impressively tight turns as the final rider in the jump-off, but it may well have been his gallop from two to three in the beginning of the round that make the difference over the course designed by Guilherme Jorge of Brazil.

Eight previous winners of the Gold Cup trophy were in the starting list, including reigning champion and three-time winner Beezie Madden, Schuyler Riley, two-time victor Peter Leone, Devin Ryan and Molly Ashe Cawley, none of whom made the jump-off, and Farrington, Mario Deslauriers of Canada who was fourth on Cloud 9 and Richie Moloney of Ireland, who was eighth on Rocksy Music.

Course designer who fabricated a lofty 16-effort pattern of fences that proved to be the perfect tool to separate the top-tier performers from the rest of the pack.

Keenan on Fasther was third to go in the jump-off, and her time of 39.83 led throughout the class until Farrington, the last to go, finished in 39.06.

Farrington on Gazelle had previously won the Gold Cup in 2016 at Old Salem Farm.

Californian Bliss Heers on Antidote De Mars, second to last to go, was third in 39.80 to round out an all-American podium.

Less than one second separated the top three contestants.

The Style Award was also awarded to Farrington as a representative of the attributes of a true horseman and sportsman.

“It was a great win today," said Farrington. "It’s a crazy time in the world, but we still have great sport, and they have done an amazing job putting on the show and keeping this a special class. I am very proud to win today. We’ve been building for a big class, and this is the biggest so far this year. I’m glad that the plan came together and the whole team was here supporting me today. Gazelle’s owner,, Robin Parsky, came to watch today and we had some extra luck from all the fans here. Like I said, I am very proud to have my name back on the trophy again. The trophy is filled with some of the best riders in our sport and some of my heroes growing up from American riding and I’m a two-time winner because I have such an exceptional horse in Gazelle and she really delivered and showed her stuff today.”

“I think it’s hard to know exactly what to expect in today’s class and how big it would be," said Farrington. "The horses haven’t seen big courses like they normally would, so I think the course was probably a touch softer than in years past which is why you had so many clear. But in our sport it’s very easy to knock a fence down and that can happen to the best of us so I thought there was still plenty clear even though some of the heavy favorites had an unfortunate fault.”

“In the jump-off, I was trying to just beat the riders ahead of me and not beat myself," Farrington said. "Gazelle is a very fast horse, she is a very experienced horse, so you can really call on her. I thought she made an exceptional turn to the double and an incredible rollback to the last and that’s probably where we picked it up today. The first line is an option, it’s a nine stride or maybe an eight stride on a big mover. Gazelle can do both, so I opted for the bending nine strides so that it was a little bit less risk so I didn’t have her too flat early on with the next fence being a closed-face liverpool. So I bent to nine, a very short turn to set up the six, I knew I could really cut on the double there. She is a great combination jumper, she is very careful, so it was a big risk there. Then same to the vertical – I could run her down dead close and turn very short, and actually I could play it a little safe to the last so I knew I had my time in hand.” 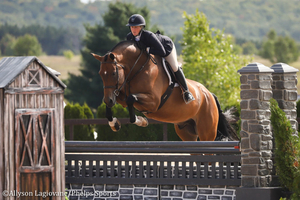 Samantha Schaefer on In The KnowAfter a competitive first round, the top 12  were back in the ring to contend for top honors in the nine-obstacle handy round.

Among the top 12 were Jacob Pope, Greg Crolick, Tammy Provost, and round one’s leader, Schaefer, topping the field with a first round score of 94.

As the final pair to enter the ring, Schaefer and the 11-year-old Warmblood gelding demonstrated a textbook round, tackling the track with ease and finesse.

Schaefer and In The Know had an impressive handy round score of 91 and an overall total score of 185.

Moving up in the ranks after the handy round, Nicholas Pongracz and Victoria Herran’s Con-Grande finished in second place on a total score of 178.5 after receiving scores of 86.5 and 92, and rounding out the top three was Caroline Weeden on Whisper, with scores of 90 and 84 to receive an overall score of 176.

"Spyder, [In The Know], is my rock," said Schaefer. "I brought him here to do the Junior Hunter National Championships at the beginning of the month, then I gave him a week off and then showed him in the last two National derbies. He was third last week and was great, and today he was himself and was perfect. We can always count on him. Even if the jumps are low, people always think he doesn’t look impressed, but he still always makes a good effort to put his best foot forward.”

"I thought today he was spot on everywhere I asked him, he was always right with me," Schaefer said. "It’s nice to have a partnership like that in these classes.”

"In the handy round, I think there were some places where you could get inside that I chose to just be smooth and go around," she said. "He is such a big horse that sometimes when I end up turning everywhere it gets a little choppy, so I just tried to make the round as smooth as possible. I knew what I had to do going into that round. I just tried not to throw it away and execute what I needed to.”