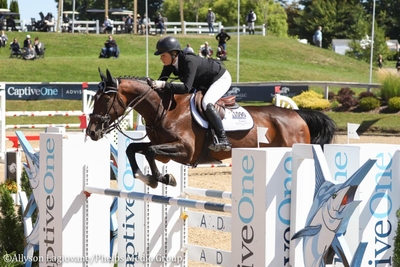 In addition, Beezie Madden has an automatic bye into the class as the reigning champion, to make it an even 50.

Capitalizing on her horse's impressive and well-known footspeed, Shahinian-Simpson rode Akuna Mattata to the blue ahead of a talented jump-off field to conclude the day with a new prize money check in her pocket and a win under her belt headed into Sunday's grand finale.

AMONG others qualified are Mclain Ward, Lucy Deslauriers, Margie Engle and Beat Mandli, so the Sunday class will be an exciting competition.

The $213,300 American Gold Cup Grand Prix CSI4*,featuring 50 top international horse-and-rider combinations will be streamed live, and can be seen at the USEF website, TraverseCityHorseShows.com/watch or ClipMyHorse.TV.

The press show will begin at 1:30 p.m., with segments about the historic contest, its previous champions and the 2020 contenders leading into a 2 p.m. start time for the exciting and historic class as it makes its debut in Traverse City.

In Saturday's class, It was a race against the clock during which 66 talented horse-and-athlete pairs contested the $36,600 American Gold Cup Speed Classic CSI4*.

Nine nations were welcomed to the International Ring, which hosted a final total of 24 fault-free performances from the pack of challengers.

Putting forth a stellar effort that exemplified speed and precision, Sydney Shulman (ISR) and Jill Shulman's Villamoura galloped to the most efficient time of the day to lead the victory gallop.