TRAVERSE CITY, Mich.--McLain ward opened with a bang in his first international competition back since Covid -19 closed down all showing, winning the first class, the $36.600 Welcome Stake on Contagious on Thursday, Aug. 27 over a field of top riders including Beezie Madden and Kent Farrington, and following that with a win in the $36,000 Speed class on Contaki on Friday. 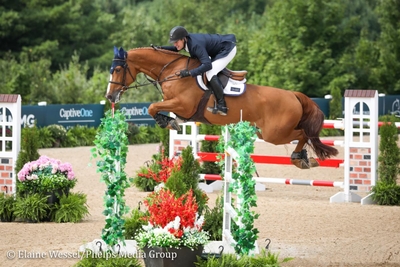 McLain Ward on Contagious (Photo by Elaine Wessel, Phelps Media Group)"I've been showing a little at Saugerties, but this is my first international competition," said Ward. "It's nice to be back showing, and the horses have been good.

Covid certainly affected everyone's plans and livelihood, but Ward, who gets a large hunk of his income from buying and selling horses, said he had come thorough it OK.

"COVID CERTAINLY slowed the market, but our business stayed steady," said Ward. "We've been selling horses, although I wouldn't say that it's been a banner year. Sales in the horse world have been flying the past two or three years." 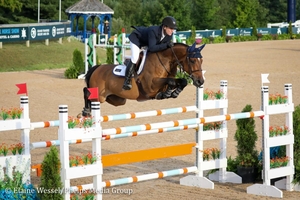 McLain Ward on Catoki (Photo by Elaine Wessel, Phelps Media Group)"I got to send some time with my family," said Ward, who, with his wife Lauren, has two children, Lily, 5, and Madison, 6 months.

"We had to make some adjustments," said Ward of the Olympics having been postponed to 2021. "We had a plan for this year, but that fell apart, so we're adjusting. We'll just keep moving forward."

Not only is Traverse City a 3* international competition, it is also now hosting the 2* American Gold Cup the week of Sept. 2-6, and Ward wants to win the Gold cup.

“It’s great to be here," said Ward of competing at Traverse City. It’s my first time here, my first competition, and Contagious performed beautifully. It felt like some really good sport in a tough year. It’s been a difficult season with the COVID-19 outbreak since Florida. We’ve been trying to stay safe and home, but it’s nice to get back into doing some international sport.”

We brought these horses out here aiming toward the American Gold Cup," said Ward. "The Gold Cup is one of the great competitions of the United States that’s eluded me, and it goes without saying it’s on my bucket list.”

“I think you see all around the world now, because people are condensed into fewer locations, you see some pretty cutthroat competition at the 2*, 3* and 4* level," said Ward. "It’s fun to compete and that’s why we do it. Contagious is a fast horse, he’s coming back off of almost one year off, and actually this summer has been great to leg him back up.”

“I decided I was going to take a good shot with this horse; I think he’s ready to start going fast," said Ward. "Galloping to the first jump, it was showing up a little bit long. I almost chickened out but I stayed with it and he jumped it beautifully and made a good rollback. Jump two to three there were six strides, but I didn’t think it was a good call for my horse today. Kristen [Vanderveen who finished second] did get it on both of her horses. I knew I could take a good shot across the middle to the yellow skinny fence. My horse was so careful and everybody rolled back in seven. The long run to the double was the bogey, that black vertical coming in short really stopped the horses and then it was a blind seven strides at best around the corner to the last jump. Three strides out I thought, ‘It’s getting far away,’ but Contagious is really confident right now and he actually jumped the fence easy. He did everything I asked.”

"We showed Contagious two days in a row because we're not doing the Grand Prix with him," said Ward. "We brought Catoki her for the sepped classes, I'm really happy with him."

"I'm a little disappointed with everything having been shut down, because one of the reasons we acquired Catoki was to take him to Europe this year and win some of the classes leading up to the Grand Prix."