TIMONIUM, Md.--GreenMount Farm’s filly by Bernardini out of Mystic Love, by Not For Love, outshined the competition as judge Michael Matz selected her as grand champion of the 86th annual Maryland Horse Breeders Association’s Yearling Show, held Sunday, July 19 at the Timonium Fairgrounds horse show ring in Timonium, Md. 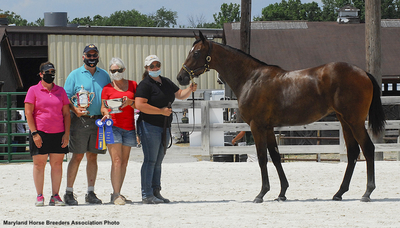 The champion of the 2020 Maryland Horse Breeders Association Yearling Show: A Bernardini filly out of Mystic LoveBred by GreenMount Farm in partnership with Godolphin, the champion filly was the winner of Class IV (for fillies foaled in Maryland, by out-of-state sires).

She was shown by Sabrina Moore, manager and co-owner of GreenMount.

“I had a good feeling about her, I mean I think she’s really nice, but until you get there and see how nice all the other horses are you don’t know,” said Moore. “It’s surreal, but I count my blessings, I know it doesn’t happen all the time. Knowing the people that are genuinely happy for you, that’s probably the best part of it.

“I love the show because they get out and you kind of get a feel for them, what they’re going to be like as soon as you get them off the farm and they [get to] school a little bit. I just think the yearling show is really key for them and I was glad to get her there.”

A TOTAL of 67 yearlings in four classes were judged by two-time classic-winning trainer and Hall of Fame Show Jumping rider Matz, who lives in Pennsylvania and trains out of Fair Hill Training Center in Elkton, Md.

“I thought the last class, that the filly won, was the strongest group,” Matz said. “She was a nice mover. She just had an overall look. I thought she was well-made and pretty well balanced.”

The reserve championship went to R. Larry Johnson’s homebred Whenigettoheaven, a colt by Street Magician out of Heaven Knows What, by Holy Bull, who won Class I (for colts and geldings foaled in Maryland, by Maryland sires).

He was one of two ribbon winners for Johnson, as his Street Magician filly won Class III (for fillies foaled in Maryland, by Maryland sires).

Street Magician was awarded the Northview Stallion Station Challenge Trophy as the leading sire of the show. Bred and campaigned by Johnson, the graded stakes winner stands as part of Legacy Farm Stallions at Roland Farm in Warwick, Md.

Class II: For colts and geldings foaled in Maryland, the produce of mares covered in states other than Maryland (13 exhibited):

Class IV: For fillies foaled in Maryland, the produce of mares covered in states other than Maryland (17 exhibited):