Sent in by Susan and Mary Jane Arden

LANDENBERG. Pa.--Paula Berkebile of Landenberg was looking forward to her birthday with particular excitement. 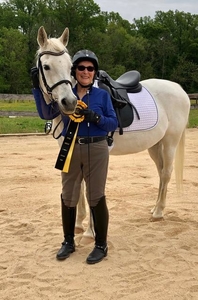 Paula Berkebile and ThorShe knew that when she reached age 75, she and her 26-year-old, three-fourths Arabian gelding, Thor, would be eligible to participate in the Century Ride.

The Dressage Foundation, which sponsors this event, stipulates that in this pinnacle event for horse and rider, their combined ages equal at least 100 years.

Paula came to riding as an adult and was self-taught until she began formal lessons when she was in her 50s.

Before discovering dressage, she showed hunter pleasure, did extensive trail riding and she even dabbled in team penning!

But it was dressage that captivated her.

As for Thor, he, too has an interesting resume.

The diminutive and dapper gray gelding had been a child’s 4H hunter, a lesson pony and for several years a lovely pasture ornament.

When Paula’s purebred Arabian, Breeze, started exhibiting signs of Cushings she was afraid her dreams of doing the Century Ride were over.

That was, until a good friend and riding instructor offered her Thor as a permanent lease five years ago.

In Paula’s own words, “ On our first ride he put his nose in the air and only stopped when I headed for a fence. But thanks to several wonderful instructors, he learned how to carry himself and stop when asked."

THEY TRAINED diligently, and by April of 2020 Paula and Thor were ready to make their bid to join the Century Club. 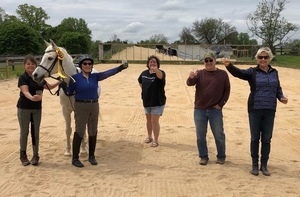 Fortunately, there was a Plan B.

By the good graces of The Dressage Foundation, Paula was permitted to ride Thor in an arena at a Landenberg farm where their performance was videotaped and judged remotely.

The big day took place in late May, and riders and friends gathered to salute Paula with a champagne toast (all the while socially distancing of course!)

The Dressage Foundation has commemorated the event by awarding Paula a certificate and their black and gold Century Ride rosette.

Paula and Thor have now joined the fewer than 450 equestrians nationwide to have achieved membership in the Century Club since its inception in 1996.