MILL SPRING, N.C.--Kelley Farmer of Keswick, Va., rode In Writing to win the $50,000 USHJA International Hunter Derby, the marquis hunter class of the Tryon Riding & Hunt Club Charity Horse Show at Tryon International Equestrian Center (TIEC),on June 5 with a first round on a score of 186. 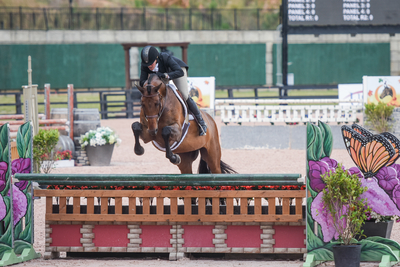 Kelley Farmer on In Writing (Photo by ©TIEC)Due to weather forcing competition to halt, her first-round score was enough to take the win.

Second placed Aaron Vale on Iwan, scored of 182, while Jennifer Alfano rode Channing to place third on a score of 169.

“The course was lovely, and I have to say, I’ve got to brag on my horse a little bit. I have an incredible animal, which makes my life really easy,” Farmer said. “The first three jumps were nice, and kind of got you into the course, and for the fourth to fifth bending line you had to have a horse with a bit of scope to jump the high option. But, I know my horse has all the ability in the world, so I never really worry with him - it’s a nice problem to have - when I walk a course, I know that pretty much anything they can build, he can do it.” 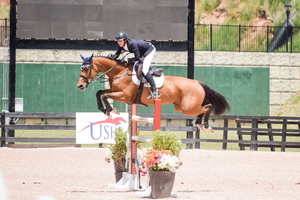 Brian Moggre on Nikita Jolie Photo by ©TIEC)Second placed Shane Sweetnam of Lexington, Ky., rode Viti de Longa to a jump-off time of 28.807 seconds, while Andrea Torres Guerreiro of Waterford, Va., was third on her own Fifty Shades, stopping the timers at 29.125 seconds.

Nineteen horse-and-rider pairs challenged the jump-off track, with eight double-clears on the day.

For both of Moggre’s mounts, it was their first class after COVID-19 related pauses in horse showing, he explained:

“It was actually the first class back showing for those two horses of mine," said Moggre. "I thought it was very welcoming, but at the same time a nice track for the competition. I was very happy with how my horses performed. After having such a long break due to the current circumstances, it is very exciting to be showing again.”

“I started riding Nikita Jolie about halfway through the winter season in Florida, and I’m still getting to know her,” Moggre said. “The mandatory break was actually a bit of a blessing in disguise because I got to know her much better. I’m super happy with how she performed. She and I are really clicking, and it’s a great partnership.”

Moggre will be based at TIEC for a few weeks before venturing to other venues, he said.

“We’ll see how everything is going and what horse shows decide to run. After this week, so far, it’s been very promising that horse shows can operate with the COVID-19 restrictions. I think TIEC has done a great job of making the show productive for everybody while maintaining safety. It’s been a great experience. I’m just so happy to be horse showing again!”