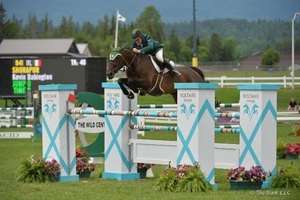 Kevin Babington on Shorapur (Photo by The Book LLC)Thirteen of 37 entries reached the jump-off by going  clean over the 15-effort, first-round course designed by Eric Hasbrouck.

Laura Chapot of Neshanic Station, N.J.,, fourth to try the eight-jump tiebreaker course, took an early lead in the jump-off when she finished clean in 37.572 seconds on Chandon Blue.

Three rides later, Devin Ryan of Long Valley, N.J.,  moved into the lead with a clean ride in a fast time of 36.614 seconds on Cooper.

Babington, defending champion in Sunday's $100,000 Grand Prix with Mark Q, was last to go on Shorapur, the horse on which he won the Grand Prix in 2016.

HE  BLAZED over the course and finished clean in 35.933 seconds to claim the win.

"I watched Devin's ride carefully, and I knew I had to add a stride to the Swedish after the double," Babington said, "but my mare is so fast that even when you're adding a stride, she's always covering ground and making up speed. I knew it was going to be really hard to catch his time but she came through as she has done here before."

Babington was fourth on Mark Q and fifth on Super Chilled.

She won the class on Zealous and placed second on Calafornia.

Babington added a win on Dundee in the $2,000 1.35m Jumper Class, which was the second win of the week for Babington on Dundee.