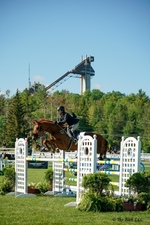 Laura Chapot on Gideon (Photo by The Book LLC)Chapot, winner of last year's $100,000 Great American Insurance Group Grand Prix, took an early lead in the class when she rode Umberto to go clean in 63.257 seconds over the 13-effort, one-round course designed by Eric Hasbrouck.

Eleven rides later, she dropped Umberto to second when she finished clean in 63.222 seconds on Gideon.

Chapot then beat Gideon's time on her final ride, finishing in 63.211 seconds on Little Firebird, but a rail down at fence 8 cost her four faults and left Little Firebird in 15th place in the 35-horse field.

Chapot's win gave her three wins in two days, coming on the heels of two wins on Wednesday.

Celebrating 50 years of show jumping in Lake Placid, the Lake Placid Horse Shows, held at the North Elba Showgrounds, are considered, “The Best Two Weeks of a Horseman’s Summer."

THE U.S. Equestrian Federation has designated the Lake Placid Horse Shows as a "USEF Heritage Competition," an honor reserved for an elite group of exceptional shows.