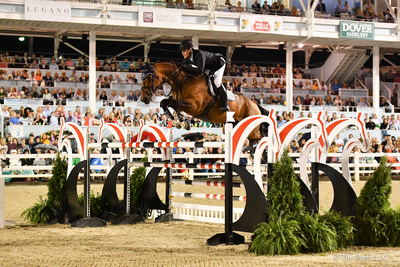 McLain Ward on HHAzur (Photo by The Book LLC)Ward, who is fourth  in the world rankings, W also presented with the McDevitt Style Award and the Richard E. McDevitt Style Perpetual Trophy.

Always the most gracious and considerate winner, following his win, Ward rode around the ring, touching hands with the spectatoris packed 10 deap around the Dixon Oval.

Winning at Devon has always been very special for Ward, especially since the grand prix is named after his legendary Olympic mount Sapphire, who died in 2014 due to complications from colic and with whom he also won the prestigious class two times in 2007 and 2009.

ASKED WHAT gave him the edge in the class, Ward said “My horse obviously! She’s one of the best horses in the world. She came back from a pretty major injury last year and was a little rusty in Florida but finished the season well there. She was able to freshen up a little bit and she felt great here.”

“This place is home for me. I love the people and I love the atmosphere — it’s a home field advantage," said Ward. "It gives you a boost and it energizes me. I love to be at our best here. The crowd is incredible and obviously I have a long standing history here. It’s as good of a crowd as anywhere in the world. I’m always proud to do well here and proud that this event is in our country.”

“It doesn’t get easier," he said. "You get to a point where you either win or you’re a bit disappointed and your team is a bit disappointed. That’s a difficult situation and something we work really hard to master. Sometimes I do it better than other times. I’ve got to keep winning this grand prix so I don’t feel old! Then you have younger people like Ali Wolff who are dealing with new experiences and fighting for their chance and their opportunity. Everybody has their battle to fight but that’s what’s beautiful about the sport.”

After sustaining an injury in July 2018 while competing at CHIO Aachen in Germany, Annie (HHAzur's barn name) was given five months off to recover before Ward began bringing his 2017  World Cup Final championship mount back into competition at the Winter Equestrian Festival in Wellington at the end of January.

They ended the season back in top form, winning the circuit’s grand finale, the $500,000 Rolex Grand Prix CSI5*.

With another major victory under their belts this season, Ward and HH Azur have undoubtedly reclaimed their reputation as a force to be reckoned with.

“I have a great team of people behind me, which is well documented and known," said Ward. "It’s the same group of people I started riding with. The veterinarians, blacksmiths — everybody does their part. To be honest, those are the people who actually do the work, not me. What I do is the final product and for sure I manage the idea and the program but you’ve got to believe that a horse is going to come back. It’s like any athlete coming back from an injury. With a horse like Azur, there’s always more expectation and people expect the same results. We keep working at it and we keep trying to figure out the solution. I think she’s back in top form. She is very hot and that’s something we’re always trying to handle. You have to manage her energy level a lot.

“I was a little surprised there were as many clears as there were ,because I thought the course walked quite difficult," he said. "The triple ended up jumping a bit better than I expected. I think it’s great to have a decent size jump-off for this crowd. It’s exciting.”

“I’m doing Upperville next," said Ward. "I think both Devon and Upperville have made great efforts in our country to bring our shows back up to a top international level and I think it’s important that the best riders we have support them so they can continue to grow into top-notch sporting events.”

COURSE DESIGNER of the 2016 Rio Olympic Games, Guilherme Jorge built a technical first round course consisting of 13 obstacles, where nine were able to produce clear rounds to ensure a jump-off. Of those nine, six finished double-clear.

Twenty-five-year-old Catherine Tyree (USA) and  Bokai led the way in the tie-breaking round with the first double-clear performance of the evening in 41.05 seconds. 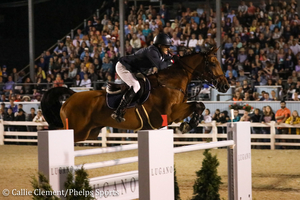 Paul OShea and Imerald Vant VoorhofHowever, their top finish was soon overtaken by Ireland’s Paul O’Shea on Imerald Van’t Voorhof who followed with another faultless round in 39.41 seconds to move into the first place position.

Throughout the next four rounds, Ali Wolff on Casall, who captured their first FEI win together at Devon in 2018 in the $50,000 Jet Run Devon Welcome Stake CSI4*, came the closest to catching O’Shea in 40.14 seconds.

Ward and HH Azur entered through the iconic blue “Where Champions Meet” archway next, going all out and clearing the final oxer in a blazing 38.12 seconds for the lead as the crowd erupted with applause and cheers.

Ward’s time held up through the remaining two challengers, ultimately garnering him his third consecutive win in the class, claiming the title in 2018 with Clinta and in 2017 with Rothchild, while O’Shea settled for second place, Wolff finished in third and Tyree rounded out the top four.

My horse jumped fantastic, said O'Shea. "I probably could have done one stride less to the last jump but that probably wouldn’t have been enough. It would have just saved half of a second but McLain was way ahead. There’s no shame in being beaten by McLain and Azur, but that doesn’t mean I won’t be trying the next time.”

“It’s a fantastic show," he said."The atmosphere is definitely very unusual and there’s definitely no other place like it. It’s just a pleasure to ride here. It’s a fantastic show.” I thought it was a perfect course. The time-allowed was very fair. I don’t think anyone had a bad experience, really, so I think [Guilherme Jorge] did a great job with it.” 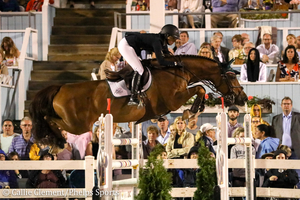 Ali Wolff and Casall Devon“It went the best it could be for me," said Wolff. "That’s the best I could have done in this company. I’m just delighted to be sitting here. It’s super intimidating [riding against people like McLain and Paul, but it actually makes me rise to the occasion, so actually they help me a lot.”

“I was a little bit surprised about the number of people clear, just because I remember it being so difficult last year," said Wolff. "That being said, Guilherme is a great course designer and did a great job this year. I thought it was tricky enough. A lot of horses kind of stared through some of the fences, especially with the crowd being right on the rail. The focus was a little tricky at times and that’s where it caught a few people. It was a super exciting jump-off and I think the crowd loved it.”

“It’s been amazing, I bought Casall to be a sales horse at the start of my business, but that clearly did not pan out," she said. "He’s just been a great partner. He grew into his own and then grew a little bit further than that. Right now, I think we’re really on the same wavelength. I ask the most ridiculous things of him and he just does it no problem. In that aspect, I can trust him and count on him 100 percent. He was a little bit spooky in the first round and stared through some of the fences but I just squeezed my leg and he focused. I trusted that he was going to be there. That type of trust and partnership is amazing.”