DEVON, Pa--Scott Stewart of Flemington, N.J., on Cabrio won the first championship in the hunter section in the Green 3’6” Hunters on Tuesday, May 28. 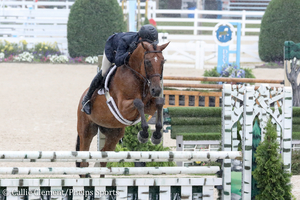 Scott Stewart on CabrioCabrio received good ribbons in four over fences classes and in the under saddle class over two days of competition to get a total of 34 points.

On Monday, Stewart and the 7-year-old Holsteiner was fourth in both over fences classes with scores of 86 and 84 and won the under saddle class.

On Tuesday  Stewart rode Cabrio to win both the handy and stake classes with scores of 90 and 88, respectively.

Cabrio was purchased by Bikoff Equestrian LLC last August from Ken and Emily Smith of Ashland Farms, with the purpose of helping 14-year-old Ella Bikoff move up to the junior hunters.

SINCE THEN, Stewart has ridden the gelding to a number of top ribbons throughout the Winter Equestrian Festival

“We bought Cabrio at the end of last summer for Ella Bikoff as one of her first junior hunters," said Stewart. "I showed him five or six times in Florida just to go around. He is primarily going to be her junior hunter though. We bought the horse from Ken and Emily Smith last August. He is a really easy ride but very fancy and a great mover. He rides around super easy."

“It was a tough division," said Stewart. "Tara Metzner rode great and it was close. I think whoever won the last class was the deciding factor for who won, it was separated by just one point. I was trying not to worry about the points today. We had a great time showing, we always do here at Devon.”

Tara Metzner won both over fences classes on Monday on Aboard Lion,to accumulate 28 points to be reserve champion.

Immediately following in the Green Conformation Hunters, Stewart dominated once again to win the championship on Scandal,

Stewart, who has been Devon's Leading Hunter Rider more times than he can remember, finished the division with a total of 39 points to take dead aim at the Leading Rider award again.

Scandal, a 6-year-old Oldenberg stallion, will eventually be shown and ridden by owner Becky Gochman.

"The way he went this week was really great," said Gochman. "He looked like he had done this a thousand times before and really relaxed. We got him a while ago, at least two years ago. I’m very trusting of Scott when he decided it’s time for me to ride. Scandal is very loving in the barn, he’s beautiful, and very smooth. He rode around the Devon ring like he was an old time campaigner. I’m really excited and I can’t wait until I get to step in the irons myself.”

The reserve championship went to Jennifer Bauersachs on Rafiki.

In the Green 3’9” Hunters, the championship was won by Alright, ridden by Holly Orlando with 23.5 points.

"Ron Danta, Danny Robertshaw, and Hunter Kay are Alright's trainers," said Orlando. "Hunter usually rides him, but he hurt his ankle in Florida so I took over the riding. Hunter has done all of the work, and I have to give him a lot of the credit. Alright is the sweetest and most fun horse to ride. He tries so hard every time he steps in the right.”

“This ring is amazing, it’s so much fun to pick up a gallop and fly around," said OOrlando. "I love it here.” 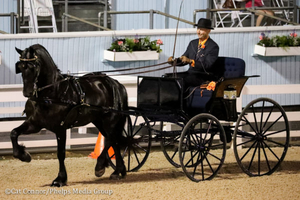 “His name is Mink, he’s from Holland," said Crowley. "We imported him as a 2 1/2-year-old for Kathleen and James Leo. Unfortunately there were only three in the ring so we kinda stayed at half speed, enough to have a nice steady go. But that was just his third gear – he’s got like six or seven in him! He’s a super guy.”

"We just love to support Devon because it’s such a special show and there is so much history to it," said Crowley. "So many of our clients have shown here for their entire lives, so it’s been really really fun. Thank you to all the volunteers, organizers and people who put this on and the tireless effort they put into it. That’s what we really appreciate because it’s all the behind the scenes stuff that goes unnoticed. We appreciate all they do to maintain the tradition.”

Finishing with the reserve championship was Gary Ward with his own Road Cart.

Following the scurry, Crowley and Ward tied in the division with 12 points each, but the tie was broken by the winner of the Single Horse Pleasure Driving Turnout, thus giving Crowley the win for the second year in a row.