DEVON, Pa.--Topping an impressive leader board, Boyd Martin of Cochranville, Pa., riding Contestor, won the $50,000 Arena Eventing at the Devon Horse Show on May 26. 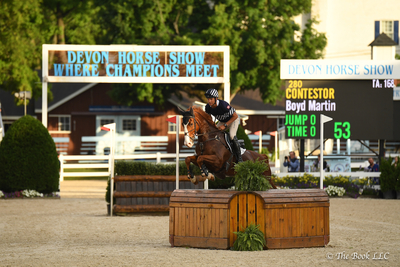 Boyd Martin on Contestor (Photo by The Book LLC)Last year's winner, Chris Talley of Jeffersonton, Va., on the stallion Sandro's Star was second, but it was third placed Buck Davidson of Unionville, Pa., on Carlevo who had the most amazing achievement.

Flying back from Vermont where he had been giving a clinic, Davidson's plane was late, so he missed his connection and had to drive from White Plains, N.Y., to Devon.

Scheduled to go 20th, officials let him go out of turn due to the circumstances, and Davidson went 28th on his first horse, Gaya, and, despite having only been at Devon for five minutes, Davidson somehow was able to memorize the 26 fence course and complete the course with just  one time fault. to eventually finish 10th after having a fence down in the jump-off.

HE CAME back to go last of the 31 competitors on Carlevo and was clean, and he was one of only two riders to place two horses in the top 12. 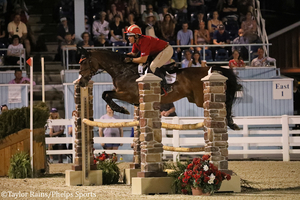 Martin, Talley and Davidson were the only three competitors that were double clean in a competition that included 26 eventing and show jumping fences through both the Dixon and Wheeler rings, and a tight time allowed, in the first round and a second round of a shortened course in the Dixon Oval for the 12 riders with the lowest number of faults.

The popular event in its third year again drew a large crowd, with spectators sitting three and four deep along the railing of the Dixon Oval.

“I’ve had Cortez (barn name for Contestor) for many many years," said Martin. "I’ve been riding for the breeder, Denise Lahey, who has bred many horses and been a wonderful supporter for me. I spotted Cortez as a 3-year-old in a clinic she taught and teamed up. He’s sort of had an up and down career but he’s just a really good boy. I’m lucky because he’s an ultimate trier. Tonight he was a home run, and I’m thrilled with the way he went. I think it’s good having a mixture of cross-country and show jumps for him, just because he likes that forward ride. Sometimes, if I get too backwards in my canter, he loses his scope a bit in the jumping so I’m pretty happy with him.”

“It’s a real honor, thrill and privilege to be here," said Martin. "I’ve been here many nights watching my wife ride at Dressage at Devon and also been here watching McLain Ward winning the grand prix show jumping. It’s one of those venues that just oozes with aura, and it’s a real honor to have eventing here. I think Mark Phillips built a good track. It’s exciting for the crowd because it was a nice night for it and I hope they do more of this.”

“I BRING a couple of horses to this that I think could suit it," said Martin. "Cortez has been around some big tracks. He’s not a very adjustable horse, so he’s a little bit quick and start-and-stop, but he really came through for me tonight. I just gave him a jump on Friday morning at home to prepare and did a couple tight turns and a few quicker fences. It’s good for us eventers to have this class though. It’s a bit of pressure, a big crowd, warming up in the dark and the shadows everywhere. It takes us out of our comfort zone so I think it’s good for us.”

There was a tight turn in the jump-off that only a few riders attempted.

“I was sort of back and forth whether to do it or not, and I couldn’t quite estimate whether it would be better to go really fast and go wide or do the tight turn," said Martin. "I saw the rider before me do it, so I knew it could be done. Cortez has a really big stride, so the challenge with the tight turn is that is makes the next combination quite long but he has got a really big step, and he walked down that line. I was pretty lucky at the last fence to be honest. He can be a little bit lazy in his show jumping and I got a good shot at it, and I went flying through the air, waiting for the horse to hit the rail behind and he cleared it and I couldn’t believe it.”

“I’ll probably run him at Essex," said Martin. "I’ve got an advanced horse trial in New Jersey in about five weeks time. I’ll go easy on him for a bit now because he had a hard run a couple weeks ago. He’s still green, and he still feels a little bamboozled out there, but he’s a handy horse to have. I’m so pleased for the owners who are also the breeders. They’ve been wonderful supporters for me through good times and bad times, and stuck right by me so I’m more thrilled for them to be honest because they really love this horse. He’s like a pet to them and to win a big class like this is huge.”

Contestor finished the 2018 season at the CIC2* level, winning the Bromont CIC Three-Day Event in August.

The first round had a time-allowed of two minutes and 38 seconds, which causes 17 of the competitors to have time faults.

In the jump-off, the top 12 returned to compete 15 obstacles. 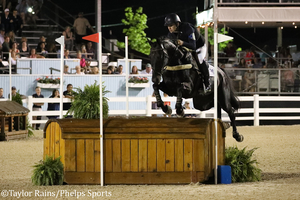 Talley who was first last year and second this year on Sandro’s Star. is now competing the stallion at the CCI4*-L level.

This year, Talley also competed for the first time at the Land Rover Kentucky Three-Day Event with an off-the-track Thoroughbred named Unmarked Bills.

Unmarked Bills has an extraordinary dam.

He is out of Kelli's Ransom, who is also the dam of Regal Ransom, a graded stakes winner who competed in both the Kentucky Derby and the Breeders' Cup Classic in 2009.

How many mares can claim to have foaled a graded stakes winner and a horse capable of completing The Kentucky Three-Day Event.

Davidson, who placed third on the 12-year-old Holsteiner gelding, Carlevo. also competed on him at the CHIO Aachen World Equestrian Festival.

Jennie Branigan of Kennett Square, Pa., who gallops horses in the morning for trainer Michael Matz, finished fourth on I Bella with one time fault, finishing the jump-off course in 79.19