DEVON, Pa.--The Devon Horse Show and Country Fair, internationally recognized as one of the largest, most elite outdoor displays of show jumping, multi-breed and multi-discipline competition in the country, returns May 23-June 2. 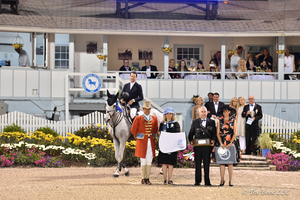 Steeped in the local traditions and lifestyle ways of Philadelphia, the Devon Horse Show is a prominent stop on the competition calendars of many top riders.

This year, show organizers are pleased to welcome Olympians such as Ward, Kraut and Beezie Madden.

The Open Jumper section is just one major highlight of the Devon Horse Show, which has prize money of $475,000.

All classes will boast an FEI CSI4* ranking and riders who compete in any of the designated events will be eligible to earn world ranking points.

THIRTY elite athletes will be chosen to take part in the Open Jumper division, which will host classes such as the $36,000 Devon International Speed Stake CSI4*, the $50,000 Jet Run Devon Welcome Stake CSI4* and the $72,000 Idle Dice Open Jumper Stake CSI4*, all of which will take center stage in the iconic Dixon Oval.

"I've always said this is a special place - it's an iconic location," said Ward after winning the 2018 $250,000 Sapphire Grand Prix of Devon CSI4* with Clinta. "The crowd is second to none. I don't think there's an atmosphere in the world that is better. It's always been a special place for me, and it was a special place for my father. Things just seem to go really well for me here. I am honored to ride in front of this crowd. I always seem to have them in my back pocket."

No stranger to Devon, Ward has a long history with the show.

Along with his two-time Olympic medal-winning partner, Sapphire, and many other of his memorable horses, he has had many wins and top results at Devon over the years.

Ward holds the record for winning the class named after the legendary mare, the Sapphire Grand Prix, an incredible 10 times, two of which were with Sapphire herself.

Riders also have come to find Devon to be synonymous with great crowds, who cheer and create electric energy for them to compete in.

This type of energy can be felt far and wide, and makes for great spectating as well as competing.

Fans can expect to see oneof their favorites, Laura Chapot, as well as recent World Cup Final competitors Kelli Cruciotti and Georgina Bloomberg,  and others including Catherine Tyree, Ali Wolff, Andy Kocher. all taking a shot at the lion's share of the prize money and valuable FEI rankings points.

Top Canadian rider Erynn Ballard will make the trip to Devon as well as Swiss rider Beat Mändli, and Amanda Derbyshire will represent Great Britain, Japanese rider Karen Polle will bring her mounts and Paul O'Shea and Kevin Babington will also be in attendance for Ireland putting the pressure on in the historic Dixon Oval.

With the grandeur of Philadelphia's Main Line setting the stage, the Devon Horse Show features an impressive field that annually ranks among the most prominent internationally.