XALAPA, Mexico--The U.S. Show Jumping Team placed second to Mexico in the Nations Cup in Mexico on Sunday, May 5 and Canada placed third. 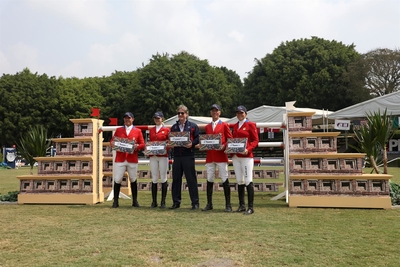 The NetJets U.S. Jumping team of (from left) Alex Granato, Eve Jobs, Chef d'Equipe Robert Ridland, Richard Spooner, and Nicole Shahinian Simpson. (Photo by Anwar Esquivel)With 200 points following their victories in Wellington in February and on May 5, Mexico holds the lead in the thee Nations Cup series followed by USA on 170 and Canada with 140.

The third and last leg will take place in Langley, Canada on June 2 where the result of the North and Central American and Caribbean League series will be decided with the top two teams in the division qualifying for October’s Nations Cup Final in Barcelona.

Richard Spooner of Agua Dulce, Calif., blazed the trail for the U.S., jumping clear but picking up one time fault in both rounds aboard Quirado RC.

In her senior Nations Cup debut for the U.S., Eve Jobs of Los Altos Hills, Calif., turned in a four-fault trip in the first round on Venue d’Fees des Hazalles, then returned in the second round to jump clear.

THE U.S. team stood tied for the lead with Mexico after the first round with a total of nine faults, with Canada in third with 14 faults.

“We looked to be in a good place after the first round, but we knew coming into it that Mexico had a strong team and would be tough to beat,” said U.S. Chef d’Equipe Robert Ridland. “It was a good day. Obviously, we wanted to win. We gave it a really good shot; we were there to the end. But the real benefit is that we got some young horses and young riders some experience that they needed." 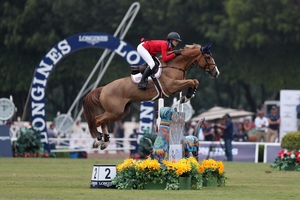 Eve Jobs and Venue d’Fees des Hazalles (Photo by Anwar Esquivel)“Eve did a great job in her first five-star Nations Cup after a strong showing at the World Cup Final," said Ridland. "She had the one mistake in the first round, but after she came out of the ring, the first thing she said was, ‘I’m fixing that mistake in the second round,’ and she did. Richard’s horse is a young horse, and for him to leave the jumps up twice in a row, that was fantastic. He’s young and on an upward trajectory, so we’re very happy with the way he went. Nikki’s mare was good, too. She had one rail each round, but really jumped well. That’s another very talented young horse. Alex’s horse jumped well in the first round, but his second round was very unusual for Carlchen.”

THE MEXICAN team of Patricio Pasquel (47), Manuel Gonzalez Dufrane (25), Lorenza O’Farrill (49) and Salvador Onate (41) won without having to call up anchorman Onate in the second round.

O’Farrill was the heroine of the day, her second-round clear with the 14-year-old gelding Queens Darling wrapping it all up nicely.

But it wasn’t just the second consecutive Mexican success that she and her team-mates were celebrating this evening, it was O’Farrill’s sensational return to the top end of the sport against all the odds.

"I’m out of myself with proudness and emotion!," said O'Farrill, who suffered a life-altering back injury when kicked by a horse leaving a prize-giving ceremony seven years ago.

Her condition deteriorated to the point where she couldn’t walk, but after a series of surgeries, and now with six screws in her spine, the rider has now bounced back to her very best.

O’Farrill said today that her comeback hasn’t been easy.

"I had to work on myself inside and out with physical therapy and mental training, but it’s been worth every minute!"

Her husband bought Queen’s Darling as an 8-year-old, but they had a couple of falls so his wife took him over and began to enjoy some success.

When she was going into surgery her husband promised that Queens Darling would be waiting for her when she was better, and since she returned to the saddle she’s been working on the horse’s spooky nature,

“I can’t change him so I use it to my advantage!” said O'Farrill, whose horses are naturally supremely fit because they live 3,000 meters above sea level in Mexico City and whose other ride, the mare Calvira, won Friday’s Longines Grand Prix.