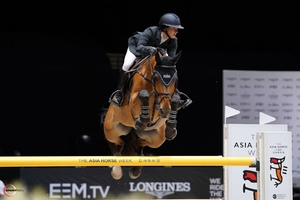 Adrienne Sternicht on Fantast, oneof the U.S. riders to win an individual class (Photo by Sportfot)The Masters of New York concludes on April 28 as the third leg of the Masters Series following stops in Paris and Hong Kong.

In a concept unique to the Masters, the Riders Masters Cup pits five-member teams from Europe and the United States in a head-to-head battle.

Robert Ridland, team captain of Riders USA, put together a strong team to face off on home soil against Riders Europe, captained by Philippe Guerdat, for the fourth edition of the Riders Masters Cup.

In what has quickly become a crowd favorite, each captain picks a rider to go head-to-head with a rider from the opposing team.

STRATEGY plays a large part, as each captain has the ability to change the match-ups for the second round and can even go so far as to switch out a rider’s horse for a fresh one.

Things were quickly tied up at 15 faults apiece however when Harrie Smolders incurred four faults riding Cas 2 while Kristen Vanderveen turned in a clear round for Riders USA aboard Bull’s Run Faustino de Tili.

In the sport of show jumping, fortunes can change quickly as Laura Chapot discovered when her mount, Chandon Blue, took exception to the signature “We Ride The World” wall and was eliminated. That meant Riders USA received zero points while Riders Europe gained 10 for Darragh Kenny’s four-fault ride aboard Sweet Tricia. Riders Europe pulled into the lead with 25 points to Riders USA’s 15.

In the final match up, Devin Ryan for Riders USA dropped one rail with Cooper. Edward Levy, the Under 25 representative for Riders Europe, kept all the rails in place to give his team another 10 points.

At the end of the first round Riders Europe was out in front with a total of 40 points while Riders USA were still well within striking distance with 30 points.

Tactics came into play with the team captains strategizing about their match-ups for the second round, which is run in a speed format with double points on the line.

In the opening match for the speed round, Ward and Rapidash were again clear but Pius Schwizer changed horses, bringing out Ulane Belmaniere to finish faster and gain 20 points for Riders Europe. The score now stood at 60 for Riders Europe, 40 for Riders USA.

Repeating the match-up from the opening round, it was Levy against Ryan. Levy brought in a new horse, Starlette de la Roque, and had one rail down for a three-second time penalty and final time of 59.65 seconds. Ryan gave it his best shot with Cooper but two rails down led to a six-second time penalty, giving him a total of 63.09. Riders Europe pulled further ahead with 80 points to the 50 held by Riders USA.

The third match-up saw Keenan and Chaccolette go clear in a time of 56.90 seconds while her opponent for the second round, Philippaerts and Insolente des Dix Bonniers, incurred a three-second time penalty for a total time of 59.86 seconds. Finally, Riders USA could see light at the end of the tunnel as their 70 points still put them in the hunt against Team Europe with 90.

It was not to be, however, as the fourth match-up would tell the final tale. Kenny was first into the ring and provided a moment of drama when his mount, Sweet Tricia, slammed on the brakes, almost dismounting Kenny in the process. Despite the six-second time penalty applied for a refusal, Kenny’s adjusted time of 66.98 seconds still held up against the 69.48 seconds posted by Chapot and Chandon Blue after the pair had two rails down.

Coming into New York, Riders Europe had won the first three events. Much to the disappointment of the supportive New York crowd, Riders Europe maintained its supremacy, remaining unbeaten in the fourth battle to date.

“I am proud of this group,” said captain Guerdat of his Riders Europe team. “I was able to create a real team spirit since the beginning of the week; we have all been eating together, for example.”

“It seems like it was a pretty big margin and, in some ways, it was, but with just a couple things going differently we could have won it,” said Ridland. “It’s not fun losing. I don’t enjoy losing and none of us were particularly happy about that but the format, I think, is tremendous. It’s unique and we will be back again in Paris and we hope for a different result.”

“For the sake of the competition, it would be nice if Riders USA manage to win in the Riders Masters Cup,” retorted Guerdat. “But for that to happen, Riders Europe will have to change the team leader – I like to win too much!”

MADISON GOETZMANN of Skaneateles, NY, kept cool and calm under pressure to win the Masters Two Equo App Grand Prix 1.45m on Sunday to be oneof the U.S. riders to win individual classes.

From the original 26-horse starting field, exactly half managed to jump clear over the track set by course designer Frank Rothenberger and advance to the jump-off.

Despite being 18 years of age, Goetzmann showed composure beyond her years to deliver the winning round in a time of 32.82 seconds riding Prestigious, her 12-year-old Westphalian gelding.

“He was incredible! He has really been on top form. He hasn’t touched one rail all week. I think that’s one of the faster jump-offs I’ve done on him; he was so game for every inside turn and all the leave-outs and I really couldn’t be happier with him.” ~ Madison Goetzmann

The highly anticipated Masters of New York officially opened on Thursday, April 25, with a five-star win for Adrienne Sternlicht (USA) to kick off four days of international show jumping competition at NYCB LIVE, Home of the Nassau Veterans Memorial Coliseum.

Speed was the name of the game and no one played it better than Sternlicht who hails from nearby Greenwich, Conn.

A team gold medalist at the 2018 World Equestrian Games, the 25-year-old American turned and burned to capture the win in the Masters One EQ Exchange 1.45m.

Forty-one of the world’s top ranked show jumping competitors took their turn over the track set by course designer Frank Rothenberger with Sternlicht posting the winning time of 26.11 seconds.

“He’s an awesome speed horse, he’s naturally very quick,” said Sternlicht of Fantast, a 14-year-old Belgian Warmblood stallion owned by Starlight Farms. “I actually went into today not planning on going for the win, but I think sometimes in a smaller ring where all the distances are related you can pick up on a flow and everything happens nicely, you can have a really fast time. I honestly didn’t know I went into the lead when I jumped the last jump, but I am very happy. I will jump him in the Longines Speed Challenge tomorrow night and that will be his most important class of the week.”