Top U.S. riders compete against a team of the best from Europe at the Masters of New York

NEW YORK, N.Y.--Thirteen Olympians and four of the top-10 riders in the world will compete at the Masters of New York, running April 25 -28 at NYCB LIVE, Home of the Nassau Veteran’s Memorial Coliseum. 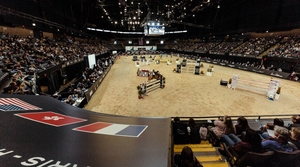 The Masters of New York features the 2019 edition of the Grand Prix of New York and the fourth leg of the innovative Riders Masters Cup, which pits Riders Europe and Riders USA teams against each other in multi-phase transatlantic duels.

All the action will be made even better with decorated riders representing 12 countries across the globe coming to New York with their very best equine athletes to compete.

From world No. 2 rider McLain Ward and four-time Olympian Beezie Madden of The United States to former world-ranking leader Harrie Smolders of The Netherlands and Darragh Kenny of Ireland, equestrian powerhouses will turn out in full force for the Masters of New York.

BUT, THEY will be contested by some of the sport's rising stars in Belgium’s Olivier Philippaerts, France’s Edward Levy, and Egypt's Nayel Nassar, as well as Adrienne Sternlicht, Lillie Keenan, and Jennifer Gates of The United States.

USA Team Captain and Chef d'Equippe Robert Ridland has announced the five riders that will make up Riders USA.

Following the conclusion of the Longines FEI Jumping World Cup Final, Ridland has made the bold move to name his team of five for the Riders Masters Cup out of the many worthy American riders coming to the Longines Masters of New York.

While there was the option of naming a short list of 10 riders, as Riders Europe Team Captain Philippe Guerdat has done, Ridland has chosen his strong team and is confident that they will be prepared to secure victory on their home turf.

These riders will go head-to-head with Riders Europe on Saturday, April 27, in front of an enthusiastic New York crowd.

Tickets for the Riders Masters Cup for the Saturday evening session start at just $35 and children 14 and under are free!

While the Riders Masters Cup is the main event, spectators will be treated to an equestrian show by Santi Serra, which features his horses’ liberty training, the Masters One 1.50m CSI 5* class and the Afterparty by Henri PFR, the official Tomorrowland DJ.

“It’s been a great competition all three times for the Riders Masters Cup, coming down to the last pairing,” said Ridland. “We were in a pretty good position last year in New York and the Europeans came through, but it’s been a terrific competition. We are hoping to turn the tide this year. We have a good team on paper with veterans McLain Ward and Beezie Madden, and Devin Ryan who competed on the first team in Paris. Laura Chapot is our ace in the hole. She is one of the fastest riders around and is a huge addition to our team. Lillie Keenan of course is a great asset, as well as our U25 representative. I think we’ve got a great shot, but we will see.”

“Now the goal is the Riders Masters Cup, and I promise you that we will do everything to win it this time.”said Madden.

A match-up between the world’s two major equestrian powers, the United States and Europe, the Riders Masters Cup is a battle that will make its second appearance at the Masters of New York after launching at the Masters of Paris in 2017.

Riders Europe has dominated the series with three wins to date, but Riders USA will be hungry for a win in their home arena.

Riders Europe Team Captain Philippe Guerdat has announced his shortlist but will not reveal the final riders until they arrive in New York.

“The Riders Masters Cup was clearly the highlight of the show last year in New York," said Ridland." The crowd was up for it, and it was a tremendous match. We are looking forward to a great event again this year. We can’t promise a different result, but we will sure try.”

“Riders Masters Cup is a great class ,and I like the format because it provides excitement down to the very end," said Ward.

“The way the point system works, it’s possible for teams can come back from a slow start,” said Ward. “It’s also an exciting competition for the crowd. There is strategy for the class; you have to have the right match-ups of riders. The team captains pick which rider goes against which rider and you want to have match-ups that you have the stronger combination for. We look at the different riders and horses, what their strengths and weaknesses are, and try to match them up where you have an advantage.”

“I am very excited to be on the Riders USA team at the New York Masters,” said speed specialist Laura Chapot. “I am looking forward to a great competition at a great event.”

Riders Europe and Rider USA athletes will be matched in head-to-head duels during the final selection at the Masters of New York on April 24 in New York.

Team leaders, riders, and their horses will take each other on at NYCB LIVE, Home of the Nassau Veteran’s Memorial Coliseum, on Saturday, April 27, at 8:15 p.m., for a historic match-up.