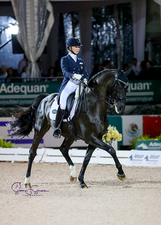 It was a night full of freestyle competition with two classes held under the lights with a full crowd of spectators.

With the final Grand Prix Freestyle win of the season, Bateson Chandler and Alcazar have shown growth and potential through the circuit.

Their win tonight garnered a final score of 75.850 percent from the judges, a personal best for the pair.

“This is the fourth time I have done this test and the other three times I’ve always done something wrong,” said Bateson Chandler. “I’ve either been off with the music or done something that was not supposed to happen. [In] this test I got a tiny bit behind my music but pretty much stayed on and I’m really happy. I have tweaked my choreography and upped the degree of difficulty a little bit, so I’m happy that now we are starting to pull it off and get the scores higher and higher each time. I’m really happy he came in today and went around and did his business.

“I’M THRILLED that now he is way more confident,” she said. “He always really suffered from nerves, but I think as you grow in a partnership – I’ve had him a long time now – you learn to really trust each other. When you feel that trust, there’s no feeling or drug in the world that can compare to an amazing ride and connection. It’s something not really describable.”

Second place went to Germany's Michael Klimke on Royal Dancer 33 on a score of 73.300 percent.

“Time is flying, and the season is over. From the riders’ point of view, we had perfect circumstances; the ground and the organization,” said Klimke. “We got a lot of money today, which is also helpful in this sport. I have been here five years and for me it was more or less the most successful season from a sport point of view, and I will come back next year with three horses that are close to grand prix. I hope Royal Dancer can go back to the Special again because under the lights is really a challenge because he is really nervous. But tonight he handled it very well. Thank you to everyone who makes it happen.”

Karen Lipp on Whitney rounded out the top three with a score of 71.875 percent.

“I haven’t really been doing the CDI ring in a really long time,” said Lipp. “She’s a very hot, nervous red head. I felt like this was the first time that I have gone in there and she worked with me. I stayed with my music, I didn’t make a lot of mistakes, I didn’t get nervous and sit there paralyzed. I liked that I actually rode the piaffe/passage tonight. I tried really hard to make it clear and crisp and did a really good job with that. She tried really hard for me, so I was happy. She gives red-headed mares a good name.”

Earlier in the evening, the winner of the FEI Grand Prix Freestyle CDI3* was Ashley Holzer riding Havanna 145.

Holzer and Havanna performed a high degree of difficulty test to music based around the pop hit “Havana” by Camila Cabello, and the judges rewarded them with a final score of 76.995 percent.

“In the end she started to really settle with the Havana music and she came to that last piaffe and really sat down and started to swing in her back,” Holzer said. “I’m very happy that she was able to settle at the end. She started to feel really good so that was exciting. The passage half-pass felt nice for me.”

It was a nice return to the ring for Havanna 145, a 12-year-old Hanoverian mare by Hochadel, whose last competition was in July 2018 at the Aachen CDI4*.

“We had some medical problems after Aachen and this is the first time she’s really come back from the medical problems,” said Holzer. “I was hoping to get her out a little earlier in the season, but she really wasn’t ready, and I didn’t want to push. I’m happy I did it. My husband said it’s a nice ending to a new beginning and that’s exactly what it was. The season ended, unfortunately, but it has given her a new beginning and we can work from here and go places. She’s showing that she’s much stronger and fitter than I thought she was.

“This mare is an incredibly talented mare,” she said. “It’s going to take a little time, but that freestyle has potential of scoring really high once she’s settled and a bit more relaxed with the atmosphere.”