MIDDLEBURG, Va..--Foxcroft School Riding Team captured the championship at the Interscholastic Equestrian Association Zone 3, Regional 3 Finals at Hazelwild Farm on March 3 in Fredricksburg, Va., with senior captain Kayla Lee winning one class and placing second in another, and no Foxcroft rider placing lower than fourth. 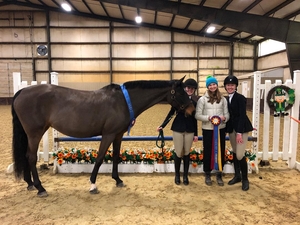 It was Foxcroft’s first IEA regional title ever and qualified the team for the Zone 3 Finals for the first time in five years.

In addition, junior Elena Barrick and freshmen Gigi Genovese and Cecilia Mould advanced to the Zone Championship as individual riders.

Elena, of Lewisburg, Pa.,, flew back from the Winter Equestrian Festival in Wellington, Fla., to compete, and she made it worth her while by winning the Individual Varsity Open Over Fences.

Gigi, a Ft. Lauderdale resident, won the Junior Varsity Novice Flat, and In the flat class, she finished third behind Cecilia of Broad Run, Va.

Only the top two performers advance, but when the winner from another school announced that she was unable to compete at Zones, Gigi joined Cecilia and both will ride in the next round.

The Zone 3 Finals, scheduled for March 29-31 in Rustburg, Va., will include riders from Delaware, Maryland, North Carolina, Virginia and West Virginia.

THE TOP finishers, both individuals and teams, will advance to the U.S. National Finals, in Harrisburg, Pa., on April 26-28.

Foxcroft won Zones in 2014 when it made its only appearance as a team at Nationals. 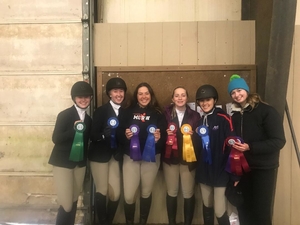 In IEA team competition, a team selects just one rider to compete in each of the seven classes.

Coaches Allie Pelz and Kendall Bear, who are both assistant directors of riding at Foxcroft, chose well in putting together Sunday’s lineup.

Kayla, an Austin, Texas resident who reached Nationals in individual competition last year, dominated the Varsity Open team classes this year, winning Over Fences and placing second on the Flat.

In that team competition, sophomore Quinna Molden of Middletown, Va., earned second Over Fences and third on the Flat in the Varsity Intermediate competition, and Gigi won the blue ribbon in the JV Novice Over Fences class.

A third for Cecilia in the JV Novice Flat class and fourth for Julia Clark of Herndon, Va., in JV Beginner Walk/Trot/Canter completed the team effort.

Foxcroft collected 35 points to 33 for Madeira, which will also send a team to Zones.

Rounding out a winning weekend for Foxcroft, school horse “Dream Away” (aka Kitty), donated by Brittany H. ’17, was named Best Horse/Pony at the show.