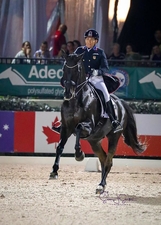 “I’ve been making personal best the last three or four shows in a row. I’m kind of excited,” said Francis.

Francis’s music especially draws in the crowd at her last centerline.

“I think at that point he’s already ready to make that piaffe and passage up the center line at the end," said Francis. "When the crowd starts clapping and cheering. he starts doing a little more. I just sit there and try to turn real careful in that pirouette, because he’s already so active and going. It feels awesome, and in that last bit of passage he feels on fire with feather-like control. The crowd picks him up a little and they pick me up. He likes this freestyle.”

The silver medal went to Yvonne Losos De Muniz on Aquamarijn with a score of 75.240 percent.

“THIS WAS A brand-new freestyle for me, and I’ve never ridden it before, even in training," said Jorst. "It was super fun to be out there and try it with Nintendo. I executed to my own surprise the pirouette into the piaffe, and that was fantastic for me. Once I get it really dialed in, I think it’s going to be such a fun freestyle. I can’t wait to do it again.”

The Spanish company Dressage and Music put together Jorst’s freestyle.

“I like music that is easily recognizable and that you can sing along with," said Jorst. "For me, this was it. It has taken me a long time to figure out what music to use. I’m looking forward to perfecting it a little more, so it isn’t so brand new. Now I’m going to go back and really work it.”

ADRIENNE LYLE on Harmony’s Duval rode to a new personal best score of 75.851 percent in the Grand Prix Special on March 16 and secured their win. 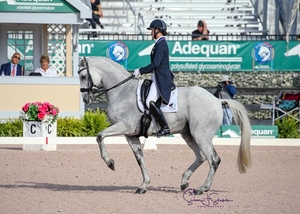 “We got the changes, yay! Finally. Those have been a little bit of a struggle for us in the ring,” Lyle said. “We worked between Wednesday and today a lot on perfecting the balance getting into the changes, and I was able to keep him at a place where he felt controlled and mentally slow enough to know what was going on.

“When I can get everything in balance it’s an incredible feeling because he has power that’s unlike any horse that I’ve ever ridden,” she said. “When that power gets away from you it’s a little bit like a runaway train, but when I can get it all, he really feels incredible and the honesty is really incredible in him.”