WELLINGTON, Fla.--While Laura Chapot always has a shot at winning when it comes to speed, she had an even bigger advantage when she and Mary Chapot’s Chandon Blue went last in the jump-off in the $36,000 1.45m Classic CSI 2*. 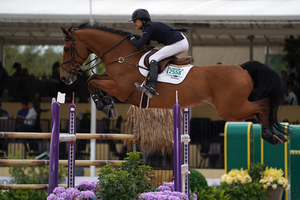 Laura Chapot on Chandon Blue (Photo boy Sportfot)Chapot was so fast around the shortened course for the win in a time of 35.37 seconds,she was two seconds faster than second place finishers Rodrigo Pessoa of Brazil on Farrero, who went first in the jump-off and almost had the wire-to-wire win.

“It’s always nice to be last in the jump-off,” said Chapot. “The main question in my mind was whether there were eight strides to the last jump and after a few went, it seemed like that was a possibility if you got the right fence in. I know my horse is naturally very fast, so I don’t want to get too caught up in the numbers around the turn and just try to ride it as smoothly as possible. I caught a really good one coming to that last line so the eight was even just nice and easy for him.”

THERE WERE 14 clear in the first round and six of those went double clear.

It was another victory this season for Chandon Blue, who won the two-star grand prix in WEF 7 and have also recorded three second place finishes in two-star and three-star competition at WEF.

Chapot has ridden the 14-year-old Oldenburg gelding by Chacco Blue for a year since Olympic bronze medalist Cian O’Connor recommended the horse to her.

“He had the horse for a number of years, and he thought it would be a good match and it’s turned out,” Chapot said. “He’s really exceeded my expectations. We didn’t really know where he would go, what ability he would end up with, but he jumps it easily and I’m just so pleased. He’s got a lot of spirit and a lot of engine, and that’s the kind of horse I like.”