David Oberkircher wins his second $25,000 Under 25 Grand Prix at WEF 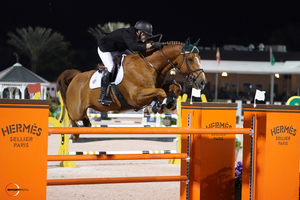 David Oberkircher on Upper (Photo by Sportfot)Oberkircher and the 11-year-old Selle Francais gelding owned by Southfields Farm, LLC, of Collegeville, Pa., were one of six entries to qualify to jump off over the Steve Stephens-designed short course.

As the second to return, Oberkircher set a time to beat of 35.10 seconds that would prove untouchable through the remainder of the class.

Coming the closest for second place was Ireland’s Daniel Coyle, who stopped the clock in 36.19 seconds on his own CHS Krooze, and finishing third with a time of 36.22 seconds was Ailish Cunniffe riding Baloucento 2.

“It’s been amazing!” said 23-year-old Oberkircher, formerly of Collegeville, Pa., who now works in Washington, DC.. “I did the series last year. I had some good results, but I was just looking to improve this year and maybe jump a few more clear rounds. To come out on top two weeks in a row has been amazing. My horse has been feeling great and jumping great, so I’m thrilled.

“I HAVE a slower moving horse, but he’s got a massive stride, so I just basically had to do the least amount of strides possible everywhere in the jump off,” said Oberkircher. “I ended up doing six home where most did seven, so that’s probably where I got them. But it was very close.”

With only a second separating Oberkircher and Coyle, Coyle was happy with his runner-up finish aboard his relatively new mount, CHS Krooze.

“These guys were brilliant,” said Coyle of Oberkircher and Cunniffe. “The horse I have tonight is one of my own horse, but she's a little new to me. I walked the course and thought ‘This is big,’ so I’m very happy. This is the first big step for her, and she really came through so I’m excited for her."

“She’s not everybody’s cup of tea,” said Coyle. “She’s just special in lots of ways, like if a horse canters past her or somebody spooks her or even tractors or simple things. For me, when horses jump as good as she does though, the rest you put up with. When I’ve put pressure on to ask her to do a little more, she’s always done it so much better, which is always the sign of a good horse. Like I say, she’s not the simplest, but the jump is there. I’ll just take my time until I have something in the end!”

Cunniffe, who led the Under 25 Grand Prix Series standings coming into the night, was also happy with her Friday night performance aboard her partner of two years, Baloucento 2.

“I felt a little pressure coming into tonight for sure, but my horse jumped great,” said Cunniffe, 21. “He loves big atmospheres; he’s great on the field, great under the lights. He was really consistent last year, and he’s been even more consistent this year. I went for it in the jump-off, but I was a little wide in places. These boys got me beat!”

All three riders will look to contest the $50,000 Hermès Under 25 Grand Prix Series Final during WEF Week 11.

For Oberkircher, who purchased Upper a year and a half ago, he will also be looking to step up into more CSI 2* and CSI 3* competition, while also juggling a full-time job as a financial analyst with Freddie Mack.

“He’s a very reliable horse,” said Oberkircher of Upper. “He’s so brave and solid. I can point him at any jump, any distance, and he’s going to go and try his hardest. As an amateur like myself, it’s a good horse to sit on.”