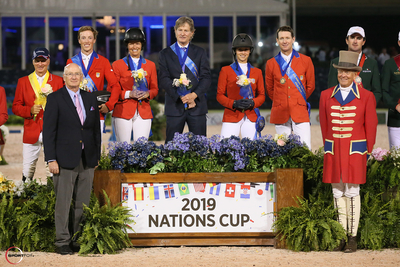 The winning USA team: Wilton Porter, Beezie Madden, Chef d’Equipe Robert Ridland, Adrienne Sternlicht, and McLain Ward, with Equestrian Sport Productions President Michael Stone and ringmaster Steve Rector. (Photo by Sportfot)It's always a great accomplishment to win a Nations Cup, but unfortunately this one does not count towards qualifying  for the Nations Cup Final in Barcelona this fall.

In the 18-year history of the Nations Cup at the WEF, there had only been one jump-off to determine the gold medal.

On Saturday, another jump-off was needed to determine the winner, and it gave the United States its seventh victory in the history of the class.

“This is what we were planning!” said Chef d’Equipe Robert Ridland of the team’s gold medal performance. “We’ve had two back-to-back Nations Cups, and rider selection is largely off the ranking lists. One of the prerequisites for these two teams was that we didn’t want to use the same horse. Beezie and McLain did both Nations Cups but on different horses. We also try to get the young riders experience that they haven’t had before. Wilton with his double clean in his debut – we’re going to bring him along as a good luck charm! That’s a pretty good way to start things off. It was a good day!”

Nine teams contested the Nations Cup in two rounds over a course set by Steve Stephens.

TEAMS OF four represented the nations of Argentina (the exception, which had three riders), Brazil, Canada, Colombia, Israel, Ireland, Mexico, the United States and Venezuela.

In the second round, the top six teams returned in order of highest to lowest total faults.

The winner was determined by the lowest total of each team’s top three riders from each round.

The six teams that returned for the second round in order from most faults to least were Mexico, Colombia, Israel, Ireland, Canada, and USA.

The winning nation was represented by Porter on Caletto Cabana, Madden on Chic Hin D Hyrencourt, Sternlicht riding Toulago and Ward on Contagious.

Three teams were tied with four faults after the first round, Canada, Ireland and the U.S..

Ward and Contagious were the pathfinders, putting in a clear in the first round but dropping the back rail at the final oxer in the second round. 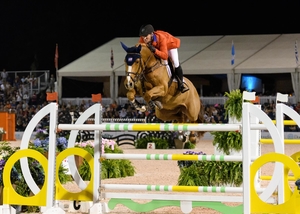 McLain Ward on Contagious (Photo by jump media) “My horse was a little nervous and needed a little bit of hand-holding,” said Ward. “I thought he jumped a much better round in the second round, and I think I thought it was done and just took it a bit for granted. He’s not really gone two rounds like that before in one evening.”

“It was kind of a neat team because you had two younger riders, and Beezie and I as veterans with two younger horses and horses for the future,” said Ward. “I think both of the horses really rose to the occasion today.

“I’m very excited to say the least,” said Porter. “I’m honored to have been able to ride with three riders who have gold medals in senior championships. That’s a pretty big honor for me, so I definitely felt like the rookie coming into it, but I have a great horse and he gave me a lot of confidence to get the job done tonight.”

“I heavily relied on my teammates tonight for our win so I’m very grateful to them,” said Sternlicht. “My horse is kind of a steady eddy. He’s so reliable. I always know what I’m going to get from him. That being said he was unexpectedly spooky at the water tonight. It’s definitely something I have to address, but again I was really happy with my horse and the way he jumped the rest of the course. I’m grateful for my teammates putting in super performances.”

As the anchor, Madden and her mount had four faults in the first round and clinched the all-important clear in the second round to take the U.S. into a jump-off with Ireland as both teams ended the two rounds with eight total faults.

“I was hoping for a double clear,” said Madden. “He was a little wound up with the atmosphere tonight for the first round and didn’t have the best warm-up. I felt like he was intense the first round, and I just tried to keep it more relaxed the second round; there were less horses out there warming up for the second round. I think he went the way he typically goes for that round.“

In the jump-off, Daniel Coyle on Farona showed fatigue and ended up with 12 faults in 41.80 seconds, so Ward on Contagious was able to cruise around clear in 43.69 seconds to secure victory.

“When Robert said there was a jump-off, I actually jumped at the opportunity because I felt he was jumping better each round,” said Ward. “ The jump-off was not such a hard job. But I thought it was nice the horse jumped his best round in the third round. I’m excited for all of his owners, and he’s got a great future.”

“This is what we were planning!” said Ridland. “It was a good day.”

Ireland finished second with a team of four riders competing on horses that had never been in a Nations Cup competition before.

Coyle, along with Lorcan Gallagher on Hunters Conlypso II, were double clear.

Shane Sweetnam on Kirschwasser SCF had four and eight faults, and Paul O’Shea riding Imerald Van’t Voorhof had four faults in both rounds.

Gallagher, who was competing in only his second senior Nations Cup, said, “It’s a bittersweet night, but I’m very happy and proud with my own horse tonight and the American team was very competitive. We were all on horses that were competing in a Nations Cup for the first time. Obviously we are disappointed we didn’t get the win when we were that close. Each round, a couple of rails fell that maybe wouldn’t have another day, but it’s great to have this competition here for us and to see what the horses are capable of. We are building towards qualifying for Barcelona and for the European Championships to qualify for the Olympics. We still haven’t done that, so that is the main goal.”

Beth Underhill onCount Me In had zero and four faults, Amy Millar and Heros had 12 and five faults, and anchor Mario Deslauriers rode Amsterdam 27 to four and eight faults.

“I thought he was very good in the first round but even better in the second round,” said Walker. “He’s such a reliable horse. I had a lot of fun with him tonight. It was very enjoyable.”