WELLINGTON, Fla.--McLain Ward on his Tryon World Equestrian Games team gold medal-winning mount, Clinta, won the $36,000 WEF Challenge Cup Round 8 CSIO 4* over a field of 68 on Thursday, Feb. 28, at the Winter Equestrian Festival.

Also earning a headline victory on the same day was Laura Chapot on Out of Ireland, who won the $25,000 1.45m Jumper Classic. 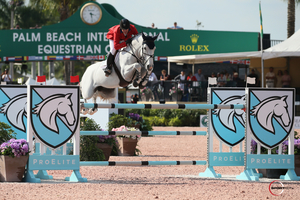 McLain Ward on Clinta (Photo by Sportfot)The WEF Challenge Cup was a one round speed class, and the time to beat when Ward entered the ring was 74.63 seconds, set by Switzerland’s Martin Fuchs on Silver Shine.

Ward shaved more than two seconds off of Fuchs’s time to stop the clock in a winning 72.52 seconds.

None of the seven final riders that followed Ward were able to catch him or Fuchs, giving Ward the win and Fuchs  second.

Finishing third with a time of 75.33 seconds was Enrique Gonzalez of Mexico riding his own Chacna.

“It was a good track for me because you could stay smooth,” said Ward. “There were rollbacks, but there weren’t extreme slices. There were no all or nothing turns, which I prefer. I think it actually suits the better riders, because they can consistently deliver a smooth round. Sometimes we have all or nothing rollbacks or inside cuts, it’s a little bit up to the gods. So, I liked the course; I thought it was good class.

“EVEN THOUGH it was a fast-enough round to win, I didn’t feel like I actually was extreme anywhere,” said Ward. “I picked up a good gallop, and things were showing up out of stride. The thing about her is, she’s so careful, you don’t have to really set up the verticals, which saves you two-tenths of a second at every vertical. By the end of the course that’s a lot.”

It proved to be more than enough for the win – Clinta’s first since enjoying several weeks of well-deserved time off following her success at the WEG and then in Europe into mid-December.

“We gave her almost five weeks of no work, no riding,” said Ward, who is aiming the mare at the World Cup Final in Gothenburg, Sweden, the first week of April. “We’ve just been slowly legging her back up. I showed her a few weeks ago in a couple of 1.40m classes. She’s a little unfit, but she feels good. She needs to compete a little bit. She’s such a quality horse; she needs to kind of get in the ring a little. I don’t think her fitness level is quite where I want it by the World Cup time, but there’s still six or seven weeks; we try to build up to peak at the right moment.” 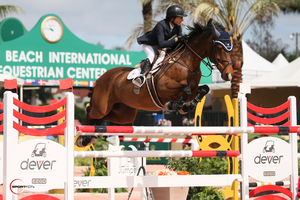 Laora Chapoton Out of Ireland (Photo by Sportfot)The large starting field was narrowed down to 11 entries qualified to return to jump off over the Steve Stephens-designed course, and once onto the jump-off, the early time to beat – and the first double clear effort – was turned in by the sixth to return, Kelli Cruciotti, who tripped the timers in 30.76 seconds to move into the lead aboard Grandy de Laubry.

Cruciotti’s lead would prove to be short-lived however, as Chapot returned next, stopping the clock in 28.81 seconds to ultimately take the win.

Third  was Martin Fuchs of Switzerland riding Faberlys, and fourth on a time of 29.84 seconds went to Shane Sweetnam of Ireland on Palina de l’Escaut.

The final double clear in the jump-off was Georgina Bloomberg on  Tulara Colmine, who finished in 33.55 seconds.

“I think Steve did a fantastic job,” said Chapot. “To have 92 horses in the class and only 11 clear – it wasn’t like he built massively, or there weren’t any people on the ground or anything like that, I think it was just technical, the time was tight, and it kept you thinking the whole way around. That catches people.”

For Chapot, who has had the ride on Out of Ireland for five years, the time was not something she really had to worry about.

“From the first day I had her, she’s always been very strong-willed and opinionated,” said Chapot of the 13-year-old Anglo European mare. “She really has her own style of jumping, but she does try to be very careful, and she’s very quick. She’s almost deceptively fast. A lot of the time, you’ll not think you’re going very fast, and she’s still winning the class.”

The mare’s own style that Chapot mentions is one with the mare’s head naturally held higher in the air than most horses, but that seems to suit her well.

“That’s been her style always,” said Chapot. “She seems to find a way to miss the jumps anyway. When I ride her, I just try to think about keeping things smooth because the less you interfere with her, the better she’s going to jump – as with most horses.”

Chapot is aiming the mare at Saturday afternoon’s $50,000 1.50m National Grand Prix before looking to potential national level grand prix events through the remainder of the WEF season.

“She’s just been sort of edging up to that level,” said Chapot. “She certainly has a lot of ability, it’s sometimes just her spirit gets a little bit in the way. She gets a little over the top going; she wants to go fast. So, we’ve been very careful about always keeping her confidence level very high because she does try hard. I think we’ll just keep looking for the opportunities as they arise to keep pushing her up a level!”