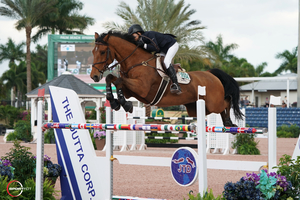 Laura Chapot and Chandon Blue (Photo by Sportfot)In a field of 45 competitors, Chapot sped to the win in the Grand Prix.

Chapot and Chandon Blue were one of eight clear in the first round and fourth to return in the jump-off over a course designed by Andy Christiansen Jr.

First in the jump-off were Canadian Bretton Chad on The Pugilist, who put down a deceptively fast clear round in 38.72 seconds that would hold up for second place.

After a fall and a scratch from the next two competitors, Peter Wylde on Canamera 2, owned by Kathleen Kamine of Oldwick, N.J., finished in 39.99 seconds for fifth place.

“BASICALLY, my plan was to leave it all on the table,” said Chad of her jump-off ride. “There were only eight in the jump-off, and one wasn’t going to go. I’m not the most experienced jump-off rider, so I thought I should just give it what I had.”

Chapot and Chandon Blue went next and through a combination of speed and tight turns, they brought the leading time down to 37.85 seconds for the win.

“Fortunately I wasn’t in the beginning of the jump-off this time, which was a nice opportunity because I got to see a few go,” Chapot said. “I saw Bretton go, and then I saw Peter go and leave out the strides and still be slower than her. That kind of made all the decisions for me. There was no playing it safe, especially with the few behind me who are very fast riders with fast horses. I just tried to do as few strides between the first couple jumps and make the turn, and then keep the rhythm through the end of the course. He’s a very fast horse naturally, so you hope that it would hold up and I was fortunate that it did.”

For Chapot, a change in Chandon Blue’s bit at the beginning of the year – she went from a pelham to a “western bit” long shank snaffle – made the difference for her ride and the horse’s adjustability.

“It’s made him a lot easier to either fit in the strides or leave it out,” she said. “He just seems to respond to it a lot easier. I can leave out strides and still make the turn after the jump.”

It was a good win for Chapot and Chandon Blue, who have picked up two seconds and a third in FEI ranking classes so far at WEF.

“I’m just so pleased for the horse to have won the class,” she said. “He really deserves it. He’s been jumping brilliantly the whole circuit and especially the last two weeks, he’s been over the top. He just has so much spirit and enthusiasm for this sport that it’s really nice for him to have a win. Everyone and the team puts in so much effort, and it’s a lot of work down here. It’s a nice reward for everyone.” 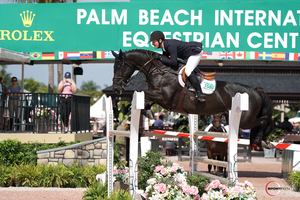 McLain Ward and Tradition de la Roque (Photo by Sportfot)Ward went first in the jump-off on HH Gigi’s Girl, and a rail and a time of 39.41 seconds left them in fourth place.

Lorenzo de Luca of Italy on Evita Van’t Zoggehof, were next, and he was clear in 37.81 seconds, which ended up second.

Third place went to Carlos Hank Guerreiro of Mesico on H5 Jemousin, who was clear in 41.07 seconds.

Ward was last to go on Tradition de la Roque, and he sped through the short course in 37.55 seconds, just taking the win by less than three-tenths of a second.

“I wanted to go in and be fast with Gigi and try to put on a little pressure, but she had an unfortunate rail,” said Ward. “Then Lorenzo’s round was fast; he took two seconds off my time on Gigi. There were not a lot of options at that point. With only four in the jump-off, you know you’re going to get a good check. I wasn’t going to not try. I thought when I landed after the double combination line, I was slower. I tried to make up a little time to the last few jumps, but it was a hair.”

“I know her pretty well now, and she’s a really solid citizen,” he said. “She’s not a complicated horse. Sometimes simple is better. You just line up and hit your shot.”

George Morris, who was the U.S. team chef d’equipe for Ward during Olympic and World Equestrian Games, was on the rail to give Ward some advice.

“He was just telling me what the one before me did,” said Ward. “George is always in my corner, and I trust his input. If he has something to say, or he sees something, I always hear him. I have my plan when I come up, and you have to be careful not to let too many things get in your head, but with George, I have a good rapport with him. If he says something, I always take notice.”

She is offered for sale, and Ward appreciates having the experienced horse in his string.

“She’s really been phenomenal for us,” he said. “She’s been in the results almost every time out of the box. If not, she was very unlucky not to be. We’re really thrilled to her. But I’m sure she’s going to find a home somewhere along the way. We’ve been on a little of four-fault-itis run here, so it’s nice to get a win in the bag.”