WELLINGTON, Fla.--F The top three in the “Friday Night Stars” FEI Grand Prix Freestyle CDI-W  on Feb. 22 at the Global Dressage Festival all earned scores above 80 percent, holding up the record set by riders in Week 5. 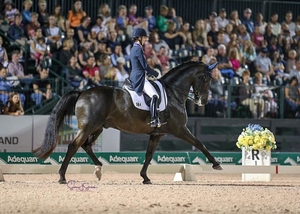 Perry-Glass and Goerklintgaards Dublet earned a score of 83.425 percent for the win.

Their freestyle music from “Lord of the Rings” was composed by Tom Hunt, and the choreography was arranged by fellow World Equestrian Games in Tryon teammate, Adrienne Lyle.

They placed second in the Freestyle CDIO5* at the 2018 World Equestrian Festival in Aachen.

“I KIND OF already felt that vibe from him, that he was going to perform really well tonight," said Perry-Glass. "From beginning in the warm-up, he felt amazing, right with me, and he tends to do that towards the end of shows.

“I was really proud of him,” said Perry-Glass. “I had him a little more put together than I did in the Grand Prix and I just tried to show off his highlights. His piaffe and passage felt really good tonight; his changes felt really good.”

Tinne Vilhelmson Silfven of Sweden on Don Auriello was second with a score of 80.950 percent with their “Good Vibrations” music and choreography by Cees Slings.

“My goal this winter has been to go to Gothenburg for the World Cup Final,” said Silfven. “He felt really, really good tonight; he’s felt good all week. He’s been eager already in the stable, like, ‘I want to go! Hurry up!’ He’s really been on his toes. Coming out tonight with this atmosphere, already in the warm-up, he was like, ‘I’m ready! Can we go?

Third place went to Shelly Francis on Danilo, who earned a score of 80.050 percent.

The crowd especially loves Francis’s freestyle, and she had a strong round of applause following her test, which has a capella music and was created by Marlene Whitaker.

“I think it’s just very entertaining with the music for the audience, and I make the movements just click one right after the other,” said Francis. “I knew that I was off of my music just a little bit here and there, but overall he felt quite good. I was trying to keep him just a little softer looking, not quite so active and sharp. I think we did smooth things a little bit, but then I was having to be careful to keep up with my music. The horse likes it, so I think he steps up to the plate. It’s fun and I enjoy it.”

Earlier in the day Jennifer Baumert and Handsome earned a score of 71.765 percent to win the Prix St. Georges CDI1*. 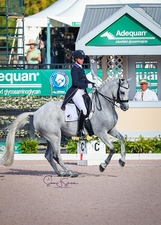 It was a close call with Lyle receiving four rider collective mark scores of 8.0 and one 7.5, and Jorst receiving three 8.0 marks, and two 7.5 marks to take second place behind Lyle.

“I thought the piaffe/passage tour was much stronger than in the Grand Prix," said Lyle. "That’s really a highlight of this horse, and I was glad we were able to tap into more of his potential in there today."

“He’s very green. This is his first year at grand prix,” said Lyle. “It’s such a process with him, just the whole what works best in the warm-up, what works best in preparation. It’s all those things when you’ve been showing the same grand prix horse for years that you know, and when there’s a new one it’s all just part of figuring out all those little things.”

“The great thing about him is that he’ll go forever; there’s not a stop in him," said Lyle. "I think his best quality is his ambition. Sometimes it’s a little overzealous, but there’s never a lack of trying with that horse. He’d jump off a cliff if you asked him to,” concluded Lyle.

Jan Ebeling on Bellenna, owned by Ann Romney, won the Intermediate I Freestyle CDI3* on Sunday. 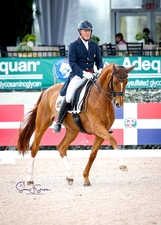 Jan Eberling on Bellenna (Photo by Susan Stickle)Ebeling and Bellenna scored 76.500 percent with their freestyle designed by Karen Robinson.

“First of all, it’s a very green horse so we’re keeping the lines fairly simple,” said Ebeling. “The horse has fantastic basic gaits. The walk, extended walk, collected walk are really great. Those are always places where she can score high.”

“Right now we’re not focusing so much on one tempi, we’re focusing on getting her stronger in the canter," said Ebeling. "She’s got a big engine, but she needs to build up the muscle. Overall, I think every day she’s gotten better. She’s learning to focus and we’re very hopeful. She is an awesome horse.”

“It’s fun, I’m lucky to have the horses that I have and the sponsorship behind me," said Ebeling. "It takes a horse, and it takes a rider, but it takes a village to really make it happen.”