WELLINGTON, Fla--David Oberkircher rode Upper, owned by Southfields Farm LLC of Collegeville, Pa., to win the $25,000  Under 25 Grand Prix at the Winter Equestrian Festival on Feb. 17. 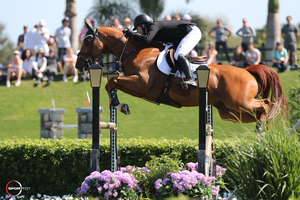 David Oberkircher on Upper (Photo by Sportfot)Riding out on the beautiful grass derby field in the morning, some of the best up-and-coming show jumpers in the world competed for top grand prix honors.

There were 43 entries in the class, with 13 of those going clear to advance to the jump-off.

The early pace-setter going third in the jump-off was 22-year-old Jennifer Gates on Oaks Redwood, who set the time to beat at 37.72 seconds, which would hold up for third place.

Gates has only ridden Oaks Redwood for a month, and this was their first jump-off together.

Gates' trainer Harrie Smolders wanted Gates to move up to the 1.45m this week at WEF.

“We thought it would be a good opportunity to test him out and see how he rode, and he was absolutely excellent so I’m really happy with him,” said Gates. 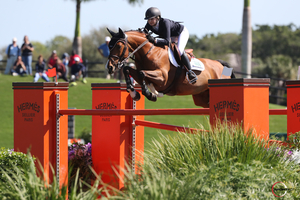 “I felt like I was on it,” McArdle said. “The one place where I took time was where David actually did one less stride. I think he did nine, and I did t0 back on that. I wanted to be real sure on that. I think that’s where I lost it, but it was really close, and I think it was good competition.”

Five horses later, Oberkircher and Upper, with a neat turn back halfway through the course, sped through the finish timers in 35.70 seconds to win.

“Upper is a bit of a slow mover, so I knew I had to do all the leave outs in the jump-off,” said Oberkircher. “Just be as tight as possible. I knew Abby and Jen were both pretty fast, so I knew I couldn’t take my foot off the gas the whole way around. I think maybe in my turn back to 14, that black vertical, I really sliced it and he handled it well. But it was very close; I mean, milliseconds.”

Oberkircher, who has ridden Upper for a year and a half, moved the horse into the Under 25 series at the 2018 WEF.

“He’s been great, and it’s been a great partnership. He’s a super brave horse,” he said.

It was the first FEI win ever for the 23-year-old Oberkircher, who is also in his second year competing in the Hermès Under 25 Grand Prix Series.

“I have a great team around me that’s supporting me, and I fly back and forth between Washington, D.C. and Florida to work during the week,” said Oberkircher, who is a financial analyst at Freddie Mack and trains with John Roche. “So to come down here and have all the hard work pay off is really great.”