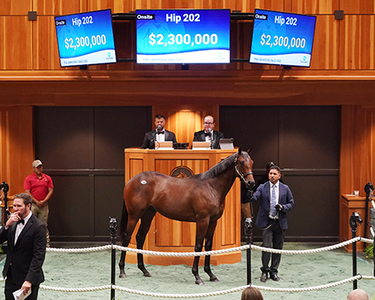 “Rarely do you all find me speechless,"said Boyd Browning, Fasig-Tipton's President and CEO. "Blown away by the results. It’s gratifying to see the hard work that our people put in, the hard work the breeders put in. The hard work the consignors put in, and honestly the buyers put in, and to see it all come together in a four- or five-day period of time and just the energy and excitement, it feels so good from the industry perspective.    '

On Tuesday evening, a colt by Gun Runner sold for $2.3 Million to White Birch Farm and M.V.Magnier and a Curlin filly was sold for $2 Million to West Point/Woodford Racing/3C Stable.

To show how amazing the sale was, a colt by Into Mischief was not sold for $1.6 Million after he didn't reach his reserve.

Eight other yearlings sold for $1 million or more, with two of them going for over $1.5 Million.

“TEN OUT OF the 74  brought seven figures. Frankly that’s unheard of,” Browning said of Tuesday evening's record sale. “And those 10 were sold to eight, nine different entities. It wasn’t, you have to have Group A on your horse, or Group B on your horse. Just broad participation. Just a robust market." 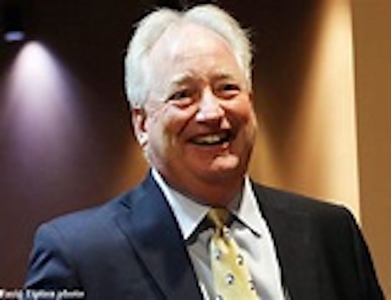 Boyd BrowningRoy and Gretchen Jackson's Lael Stables' bought a third filly after buying two Monday evening, this one by Omaha Beach out of Glory Gold,by Medaglia d'Oro, for $500,000.

Patti Miller, agent for EQB, Inc., bought a colt by Flatter out of Blind Copy,by Distorted Humor, for $150,000.

"There was a lot about him that we liked,"said Miller. "The sire, Flatter,isn't popular,but he gets good horses. He's back on my farm in Unionville."

While there was huge excitement about this sale, Miller said there were some aspects about it that she felt are bad for sales and racing.

"There's a lot of groups coming together (in syndicates) to buy horses, and they drive the prices up," said Miller. "It makes it hard for individual owners who don't want to be a part of a group."

"I loved that filly that sold for $2 Million," said Miller. "I had people interested in her, but when I saw how much she was going to bring I called them and said she's not worth it."

Miller said she didn't feel any yearling was worth $1 million, a feeling many people agree with.

"There are so many hurdles in front of young horses, Injuries, accidents, illnesses, racetrack surface problems, airway issues, stabling in dusty racetrack environments, and a multitude of viral, protozoal, and bacteria infections. Most trainers go crazy trying to cut down on those risks," said Miller. "If a million plus colt gets snagged by any or all of those risks, he's a 5k claimer, or if he's lucky, a beloved foxhunter, show horse, or trail horse. If a seven figure filly doesn't run, or is compromised, she might only be worth 20 percent or less of that hefty purchase price."

"There's a lot of money out there looking for things to do," said Russell Jones of Unionville, Pa., a former bloodstock agent who owned Walnut Green. "People who have that kind of money don't look at inflation or recessions. This was a good catalog."

"The statistics are phenomenal," said Browning. "We shattered every record known to mankind for this sale. That’s a really, really good feeling, but it’s not just for us, it’s a really good vibrancy for the industry and it gives people confidence. We basically had two yearling sales so far this year and both have been really damn good."

“If you’re in the Thoroughbred industry, at whatever level, and in particular in the United States, Saratoga is the epitome," said Browning. "At the racetrack and I hope in the yearling sales arena. It energizes everybody. It’s like the annual dose of hope and excitement. This is why we do it. You could see people, our industry is alive. You could see people smiling on the sales grounds this week in their interactions with each other. Buyers and sellers, sales companies, van companies and veterinarians. It wasn’t, the gnarly, ‘Ah, we’ve got to figure this thing out a little bit,’ it was ‘This thing is really good, there’s really good horses here, there’s really good buyers here.’ Just a great feeling.”

Browning got a little emotional talking about the people working behind the scene making the sale work when he gave the sales briefing to the press Tuesday evening.

“I get to come up here tonight and take all the credit, but all the credit, but that’s where the credit goes,” Browning said, holding up the catalog page listing Fasig-Tipton’s officers, administration staff and auctioneers and announcers. “And to the men and women who supported us with one hell of a group of horses to sell this year. That’s where the credit goes, and I’m fortunate enough to come up here and report the good news. It’s been a lot of good news most of the time in recent years."

“And the cool thing is, and I’ve said it before, and everybody thinks I’m lying, that group, they’ll be working on the Timonium sale, getting ready for the New York-bred sale, working on November, working on the California sale," he said. "What do we do different? We’re such maniacs we’ll sit down, it might wait until Thursday, ‘What can we do to make the 2023 sale better?’  It’s a tribute to those folks, the men and women who work for the organization and it’s a tribute to our customers. We appreciate them, buyers and sellers alike. Just a great 2022 Saratoga."