SARATOGA, N.Y.--The Fasig-Tipton Selected Yearling Sale, Aug. 6,7 in Saratoga had five yearlings, two by Triple Crown winner America Pharoah and three by Medaglia d'Oro, sell for $1 million or more, with Roy and Gretchen Jackson's Lael Stable of West Grove, Pa., buying one of them, a Medaglia d'Oro filly out of Varacity, by Distorted Humor for $1 million early in the sale Tuesday evening.

Jackson said they bought the filly  to eventually add to their broodmare band. 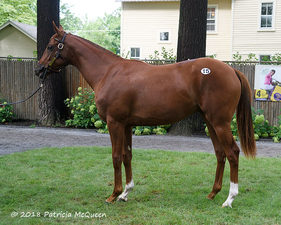 Seven Pa-breds went through the ring, with three sold for an average of $176,000 and four not reaching their reserves.

EQB's Patti Miller of West Grove, Pa., bought two, including a Pa-bred colt by Distorted Humor out of La Boheme, by Giant's Causeway for $120,000.

"I actually bought nine, but seven were for a new client who signed the tickets himself," said Miller. "It was a good sale, a very strong sale. It was a tribute to Bill Gates."

Graves, a long time Fasig-Tipton executive who was Midlantic sales director, died earlier this year, but he had been instrumental in putting together the catalog of top yearlings that sold in Saratoga,

THE TWO yearlings that Miller signed the ticket for were bought for Bruce Lunsford.

"I thought we got the Distorted Humor colt for a very good price," said Miller of hip number 15, consigned by Warrendale Sales, agent, that she bought early Monday evening. "We loved him. He'll probably go to Canada or to a trainer who is based at Finger Lakes."

Miller also bought hip number 185,  a filly by Kitten's Joy out of Cardinalli, by Capote, consigned by Taylor Made Sales  Agency, agent.

Four Md-breds sold for an average of $190,000, with Marshall Silverman of New Freedom, Pa., agent for Marathon Farms, selling hip number 25, a colt by Palace Malice out of Lexington Girl, by Storm Cat, for $80,000 to Tom McCrocklin, agent.

"His reserve was $79,900, so we sold him, unfortunately," said Silverman. "I should have bought him back and put him in the Maryland Sale (the Fasig-Tipton sale at Timonium). He would have been a bigger fish at a little pond there."

Hip number 213, consigned by Bluegrass Thoroughbred Services for  Country Life Breeding Partnership, a filly by Palace Malice out of the Malibu Moon mare Fifteen Moons didn't reach her reserve, so Country Life regrouped and formed a Racing Partnership with a number of the partners in her dam.

"The nucleus of the breeding partnership elected to campaign this attractive but still immature Maryland bred, and bid $50,000," said Country Life of Bel Air, Md., in a press release. "Fifteen Moons is the dam of G3-placed, $305,132 earner Mayla (carrying her first foal, by American Pharoah), of this month’s stylish Maiden winner Lunar Rille, who races for the Fifteen Moons Partnership, and of $243,196-earner Moon Vision.

"It helps that Fifteen Moons’ 1/2 -sister is G1 winner Hookedonthefeelin, in turn dam of G1 winners Pussycat Doll and Jimmy Creed, No. 3 on the 2nd-crop Sire List.

"Hookedonthefeelin is also the dam of stakes winner Funny Feeling, whose yearling American Pharoah filly sold for $875,000 at the Saratoga sale."

FIVE  Va-breds went through the ring, with three selling for an average of $273,000 and two not sold.

Twelve NY-breds went through the ring, with one, a colt by American Pharoah out of Party Silks, by Touch Gold, consigned by Summerfield, agent for Sunnyfield Farm, selling for $1 million to M V Magnier/Bob Baffert, agent.

Without the $1 million sale, eight remaining NY-breds sold for an average of $249,000 with three not sold.

Of all the Pa-breds, Md-breds, Va.-breds and NY-breds, only one, hip number 227, a Va-bred by Uncle Mo out of Gemini R N, by Mineshaft, property of Chilly Bleak Farm, sold for over the average price of the sale, selling for $400,000 to F. Brothers, agent for Starlight.

Three by Union Rags went through the ring with none of the three meeting their reserve price.

"It was a good, solid sale," said Russell Jones, Union Rags' manager for owner Phyllis Wyatt. "There were plenty of buyers. Fasig-Tipton did a good job of putting good horses with good pedigrees on the grounds. You know it's a good sale when there are that many million dollar hoorses. It was even solid from a buy-back standpoint."

"It was a successful beginning to the sales season," said Jones, "As a boutique sale, it is perhaps not representative, but it might be an indicator."

"It was nice that the American Pharoah's were so well received," said Jones. "There wasn't a banner selection of Union Rags' yearlings for people to chose among. They'll do better at the later sales."

The sales topper was hip number 196, a colt by Medaglia d'Oro out of the stakes winning mare Coco's Wildcat, by Wildcat Heir., consigned by Taylor Made Sales Agency, agent, and bought by West Point Thoroughbreds, Rob Masiello, C. Larsen, Siena for $1,350,000.

That colt is going to be trained by Graham Motion, who is based at Fair Hill Training Center.

AFTER THE sale Monday evening, Fasig-Tipton President Boyd Browning said that the gross that evening was up 18 percent.

"It was a very, very encouraging start," said Browning. "There was very, very intense competition among buyers. There was a great deal of activity between $250,000 and $700,000. Seven of the eight top sales were fillies tonight, but we have stronger colts tomorrow night. The buyers are demanding quality."

"We were obviously missing, in person, a key member of our team, but I think he was with us," said Browning. "He was with us throughout the selection process, putting the catalog together. We barely established the record, by like a couple hundred thousand dollars."

"It's humbling," said Browning. It's invigorating. We're proud of the sale. It's a significant accomplishment. It doesn't happen without a tremendous team. I think we have the best team in the world at Fasig-Tipton. It's a collection of people who truly care about the business, about the company, about the people we sell for and about each other."

Gates' son Brian, along with Jamie Hill and Mike MCMahon pinhooked the American Pharoah filly out of Life at Ten, by Malibu Moon as a weanling for $500,000, and she sold in Saratoga for $1.2 million.