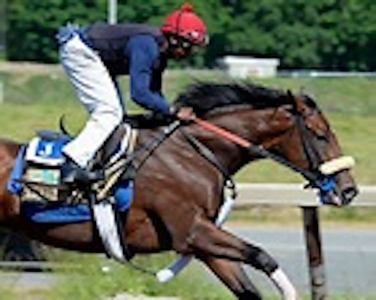 His most recent stakes winning juvenile is Brooklyn Strong, who won the G2 Rremsnen Stskes st Aqueduct on Dec. 5, 2020 after winning the $150,000 Sleepy Hollow Stakes at Belmont on Oct. 24.

Brooklyn Strong was the only New York-bred entered in the Remsen, but he had no trouble in open company with a hard fought triumph by a neck over 6-5 post time favorite Ten for Ten in Saturday’s nine-furlong event for 2-year-olds.

A top-10 freshman sire nationally in 2019 by progeny earnings, Wicked Strong ranked second by number of winners with 26, one less than American Pharoah, Constitution and Tapiture.

Among his first crop runners, now 4, are Evil Lyn, winner of Pimlico’s Hilltop Stakes in 2020 and the Lady Canterbury Stskes in 2021, and Wicked Runner, a stakes winner at 2 and 3 in Puerto Rico.

His 3-year-old Por Que No won the Boiling Springs Stskes in 2021 at Monmouth.

Of his 15 black-type horses in his first three crops to race, seven earned black-type at 2. 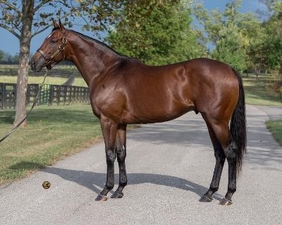 Graded stakes-placed at 2 when third behind Honor Code in the G2 Remsen, he was second by a nose to his stablemate V. E. Day the next summer in the G1 Travers Stakes.

He turned in strong showings in the 2014 classics, finishing fourth after a tough trip in the G1 Kentucky Derby, won by California Chrome, and getting up to dead heat with California Chrome for fourth in the G1 Belmont Stakes while finishing less than two lengths behind Tonalist.

During his 4-year-old season, he had four stakes placings, including a second to Tonalist in the G1 Jockey Club Gold Cup and a third behind Liam’s Map in the G1 Woodward Stakes, and concluded his 19-start career with a fourth in the G1 Breeders’ Cup Dirt Mile won by Liam’s Map. 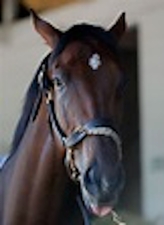 Wicked Strong has a pedigree with strong classic lines.

His family is filled with graded stakes winners including two-time G1-winning millionaire Student Council; his dam is a half-sister to graded winners and G1-placed Gulch Approval and Rusty Slipper as well as stakes winner and graded-placed Approval Rating.

The syndicated stallion, who previously stood at Spendthrift Farm in Lexington, Ky., will stand for $3,500, payable when the foal stands and nurses, with multiple mare discounts of $3,000 for two mares and $2,500 for three or more mares.